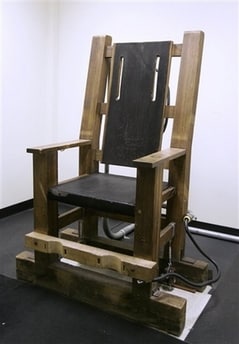 Nebraska’s electric chair is seen in Lincoln, Neb., Monday, April 16, 2007. When the state of Nebraska tries to kill death row inmate Carey Dean Moore with 2,450 volts in the electric chair May 8, some expect movement after the jolt, from Moore’s heart. The macabre image of an inmate in the chair with a beating heart possibly several minutes after the state tries to put him to death isn’t drawn by somebody trying to scuttle the execution. It comes from the Florida doctor who devised the new, untested execution protocol that Nebraska has adopted after a judge rejected the old one. (AP Photo/Nati Harnik)