Acid Rain: How is it made? What are its effects?

Acidic pollutants can be deposited from the atmosphere to the Earth’s surface in wet and dry forms. The common term to describe this process 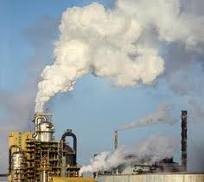 is acid deposition. The term acid precipitation is used to specifically describe wet forms of acid pollution that can be found in rain, sleet, snow, fog, and cloud vapor. An acid can be defined as any substance that when dissolved in water dissociates to yield corrosive hydrogen ions. The acidity of substances dissolved in water is commonly measured in terms of pH (defined as the negative logarithm of the concentration of hydrogen ions). According to this measurement scale solutions with pHs less than 7 are described as being acidic, while a pH greater than 7.0 is considered alkaline (Figure 8h-1). Precipitation normally has a pH between 5.0 to 5.6 because of natural atmospheric reactions involving carbon dioxide. For comparison, distilled water, pure of any other substances, would have a pH of 7.0. Precipitation is considered to be acidic when its pH falls below 5.6 (which is 25 times more acidic than pure distilled water). Some sites in eastern North America have precipitation events with pHs as low as 2.3 or about 1000 times more acidic than natural.
Acid deposition is not a recent phenomenon. In the 17th century, scientists noted the ill effects that industry and acidic pollution was having on vegetation and people. However, the term acid rain was first used two centuries later when Angus Smith published a book called ‘Acid Rain‘ in 1872. In the 1960s, the problems associated with acid deposition became an international problem when fishermen noticed declines in fish numbers and diversity in many lakes throughout North America and Europe.
Acid Deposition Formation

Acid deposition can form as a result of two processes. In some cases, hydrochloric acid can be expelled directly into the atmosphere. More commonly it is due to secondary pollutants that form from the oxidation of nitrogen oxides (NOx) or sulfur dioxide (SO2) gases that are released into the atmosphere (see Figure 8h-2). Reactions at the Earth’s surface or within the atmosphere can convert these pollutants into nitric acid or sulfuric acid. The process of altering these gases into their acid counterparts can take several days, and during this time these pollutants can be transported hundreds of kilometers from their original source. Acid precipitation formation can also take place at the Earth’s surface when nitrogen oxides and sulfur dioxide settle on the landscape and interact with dew or frost.

Emissions of sulfur dioxide are responsible for 60-70% of the acid deposition that occurs globally. More than 90% of the sulfur in the atmosphere is of human origin. The main sources of sulfur include:

After being released into the atmosphere, sulfur dioxide can either be deposited on the Earth’s surface in the form of dry deposition or it can undergo the following reactions to produce acids that are incorporated into the products of wet deposition (Figure 8h-2):

Acids of nitrogen form as a result of the following atmospheric chemical reactions (see Figure 8h-2 above):

Finally, the concentrations of both nitrogen oxides and sulfur dioxides are much lower than atmospheric carbon dioxide which is mainly responsible for making natural rainwater slightly acidic. However, these gases are much more soluble than carbon dioxide and therefore have a much greater effect on the pH of the precipitation.

Acid deposition influences the environment in several different ways. In aquatic systems, acid deposition can effect these ecosystems by lowering their pH. However, not all aquatic systems are effected equally. Streams, ponds, or lakes that exist on bedrock or sediments rich in calcium and/or magnesium are naturally buffered from the effects of acid deposition. Aquatic systems on neutral or acidic bedrock are normally very sensitive to acid deposition because they lack basic compounds that buffer acidification (see Figure 8h-3). In Canada, many of the water bodies found on the granitic Canadian Shield fall in this group. One of the most obvious effects of aquatic acidification is the decline in fish numbers. Originally, it was believed that the fish died because of the increasing acidity of the water. However, in the 1970s scientists discovered that acidified lakes also contained high concentrations of toxic heavy metals like mercury, aluminum, and cadmium. The source of these heavy metals was the soil and bedrock surrounding the water body. Normally, these chemicals are found locked in clay particles, minerals, and rocks. However, the acidification of terrestrial soils and bedrock can cause these metals to become soluble. Once soluble, these toxic metals are easily leached by infiltrating water into aquatic systems where they accumulate to toxic levels.

In the middle latitudes, many acidified aquatic systems experience a phenomenon known as acid shock. During the winter the acidic deposits can buildup in the snowpack. With the arrival of spring, snowpack begins to melt quickly and the acids are released over a short period of time at concentrations 5 to 10 times more acidic than rainfall. Most adult fish can survive this shock. However, the eggs and small fry of many spring spawning species are extremely sensitive to this acidification.

The severity of the impact of acid deposition on vegetation is greatly dependent on the type of soil the plants grow in. Similar to surface water acidification, many soils have a natural buffering capacity and are able to neutralize acid inputs. In general, soils that have a lot of lime are better at neutralizing acids than those that are made up of siliceous sand or weathered acidic bedrock. In less buffered soils, vegetation is effected by acid deposition because:

The combination of these effects can lead to plants that have reduced growth rates, flowering ability and yields. It also makes plants more vulnerable to diseases, insects, droughts and frosts.

The effects of acidic deposition on humans can be divided into three main categories. Acid deposition can influence human health through the following methods:

Acid deposition also influences the economic livelihoods of some people. Many lakes and streams on the eastern coast of North America are so acidic that the fish decline significantly in numbers. The reduced fish numbers then influence commercial fishermen and industries that rely on sport fishing tourism. Forestry and agriculture are effected by the damage caused to vegetation. In some areas of eastern North America and Europe, large die-backs of trees have occurred.

need to say what chemicals are in acid rain