Spray cans produce an aerosol, the technical term for a very fine spray. They do this by means of a pressurized propellant, which is a 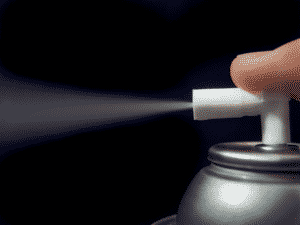 liquid that boils at everyday temperatures. Inside the can, a layer of gaseous pressure increased, and eventually it becomes so high that boiling stops. When the nozzle is pressed, the gas pressure forces the product up the tube in the can and out of the nozzle in a spray or foam. The propellant may emerge as well but, now under less pressure, it immediately evaporates. First patented in the US in 1941, aerosol spray cans have been used as convenient packages for an ever increasing range of products including paints, insecticides, and shaving cream to name a few. The can is filled with the product to be sprayed and the propellant, a compressed gas such as butane or Freon. The gas is partly liquefied by the pressure in the can, but there is a layer of free gas above the liquid. As the can empties liquefied gas vaporizes to fill the space.

The valve is normal held shut by the pressure in the can, and by the coil spring directly below the valve stem. When the push button is pressed, it forces the valve stem down in its housing, uncovering a small a small hole which leads up through the stem to the nozzle in the button. This allows the product to be forced up the dip tube by the gas pressure in the can. The nozzle is shaped to give a spray or a continuous stream.  To produce a fine mist, a propellant is used which mixes with the product. The two leave the nozzle together and the propellant evaporates a soon as it reaches the air, breaking the product in to tiny droplets. The same technique used with a more viscous liquid and a wider nozzle results in a foam. For a continuous stream of liquid or more viscous material, a nonmixing propellant is used, and the dip tube reaches into the product.

The widespread use of aerosol cans using Freon as the propellant led scientists to believe by the late 1970s that the ozone layer in the upper atmosphere, which filters out harmful Ultraviolet radiation from the sun, could be destroyed by the large quantities of fluorocarbons in the gas being release into the air. Federal controls were introduced to ban the use of Freon, and other propellants are now employed, notably butane which, however is dangerously flammable. Among young people in United States, conventional drug or alcohol abuse has given away-for an increasing number of teen- agers-to a practice called ‘huffing’, inhaling chemicals found in aerosol sprays and other common household items such as cigarette lighters, paint thinner, gasoline. Inhalant abuse is becoming increasingly common among young middle-class teenagers. It is a cheap, and sometimes deadly, thrill.