The word “albinism” refers to a group of inherited conditions. People with albinism have little or no pigment in their eyes, skin, or 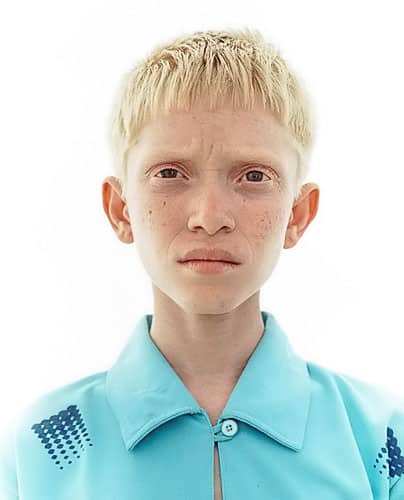 hair. They have inherited genes that do not make the usual amounts of a pigment called melanin. One person in 17,000 has some type of albinism. Albinism affects people from all races. Most children with albinism are born to parents who have normal hair and eye color for their ethnic backgrounds. Albinism is found on the eleventh chromosome, section q, loci 14-21.  Oculocutaneous albinism involves the eyes, hair, and skin. Ocular albinism involves primarily the eye. People with ocular albinism may have slight lightening of hair and skin colors as well, compared to other family members. At present researchers have found 10 different types of oculocutaneous albinism, and five types of ocular albinism. Newer laboratory research studying DNA has shown that there are numerous types of changes in the genes of those with albinism, including within families.  The most common types of oculocutaneous albinism are called “ty-negative” and “ty-positive”. Persons with ty-negative albinism have no melanin pigmentation, and more difficulty with vision. Those with ty-positive albinism have very slight pigmentation, and generally less severe visual difficulties. Tests were done on the hair roots of individuals with albinism, to tell these types of albinism apart. However, these hair tests cannot identify types of albinism, particularly in young children, whose pigment systems are immature. Therefore hair tests are not helpful in predicting the extent of visual disability of a child. “Ty-Neg” (also called Type 1A) albinism results from a genetic defect in an enzyme called tyrosinase. Tyrosinase helps the body to change the amino acid tyrosine into pigment. The genetic defect that causes albinism in other types of albinism is unknown, but it is speculated that it involves other enzymes used to make pigment.

Albinism is passed from parents to their children through genes. For nearly all types of albinism both parents must carry an albinism gene to have a child with albinism. Parents may have normal pigmentation but still carry the gene. When both parents carry the gene, and neither parent has albinism, there is a one in four chance at each pregnancy that the baby will be born with albinism. This type of inheritance is called autosomal recessive inheritance.      If a parent has a child with albinism, it means the parent must carry the albinism gene. Until recently, unless a person has albinism or has a child with albinism, there was no way of knowing whether he or she carries the gene for albinism. Recently a test has been developed to identify carriers of the gene for ty-negative albinism and for other types in which the tyrosinase enzyme does not function. The test uses a sample of blood to identify the gene for the tryrosinase enzyme by its DNA code. A similar test can identify ty- negative or similar albinism in unborn babies, by aminiocentesis. People with albinism have very normal lives. They play sports, have normal intelligence, and can have babies. The only difference between normal people and albino is that they don’t have pigment in their skin.