Oenochoai (Oenochoe) may be decorated or undecorated. Oenochoe typically have only one handle at the back and may include a trefoil mouth and pouring spout.Their size also varies considerably; most, at up to 25 cm tall, could be comfortably held and poured with one hand, but there are much larger examples. 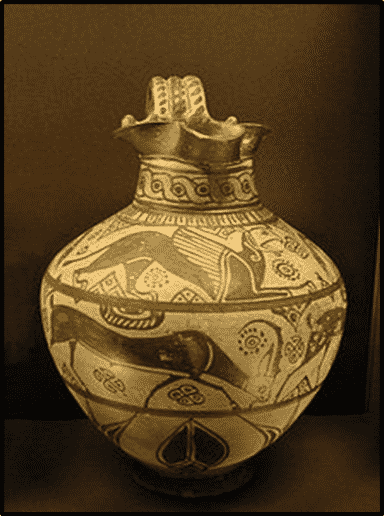 Alabastron, a small vessel of oblong form, was made to hold perfumed oils. It was produced by winding threads of semi-molten glass around a clay core, the decoration being obtained by working a thread of violet glass into a zigzag pattern.Developed in Mesopotamia and Egypt in the second millennium BC, the core molding technique became very popular throughout the Mediterranean world in the late sixth century BC, on the island of Rhodes in particular.

READ:
Plotinus: the One, the Intellect, and the Soul

Psykteres were special items for the symposium. The psykter would be filled with ice-cold water and set in the middle of a large bowl (a krater)filled with wine, so as to cool it.This psykter has a group of satyrs, followers of the wine-god Dionysos, partying wildly on its sides. 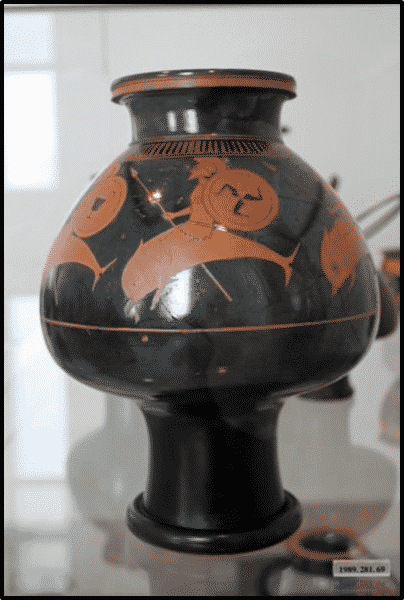 Vases displayed in this case were used to prepare, serve, and consume wine at such gatherings. As the evening progressed, participants engaged in other pleasures, including games, performances, and sex.It was considered uncivilized for a Greek to consume undiluted wine, so water was fetched from a public fountain house in a jar like this example. The horizontal handles were used to carry the vase, which was quite heavy when full, and the vertical handle at the back was used to pour the water. 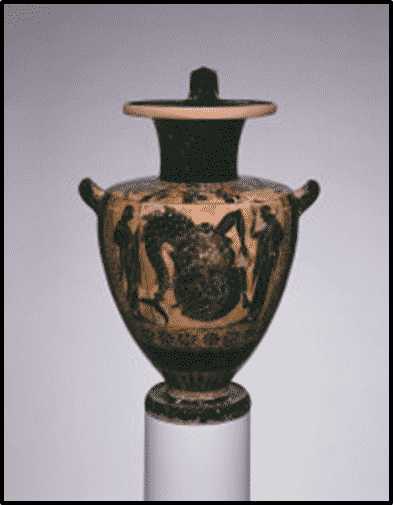 Athenian stamnos was used to hold and mix wine. Also valued for its beauty, this red-figure vessel (so called because the figures remain the natural color of the clay) portrays maenads, women participants in rites celebrating Dionysos, the god of wine.But unlike the frenzied and whirling figures of other Greek vases, these women convey calmness, even elegance. 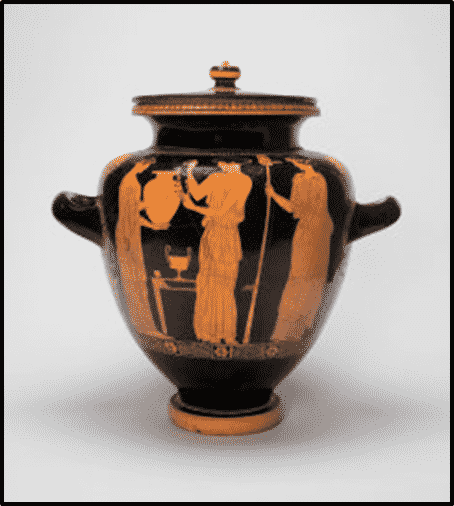 Lekythoi were especially associated with funerary rites, and with the white ground technique of vase painting, which was too fragile for most items in regular use.Because of their handle they were normally only decorated with one image, on the other side from the handle; they are often photographed with the handle hidden, to show the painted image. 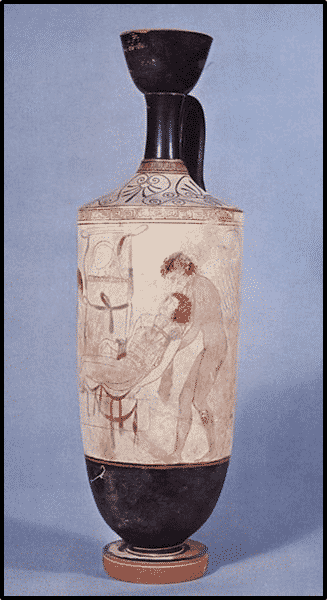 Hypnos and Thanatos carrying the body of Sarpedon from the battlefield of Troy; 30 and 50 cm Ceramic, circa 440 B.C.E. The Art Inst. of Chicago

Anthesteria was one of the four Athenian festivals in honor of Dionysus. It was held each year from the 11th to the 13th of the month of Anthesterion, around the time of the January or February full moon.The three days of the feast were called Pithoigia, Choës, and Chytroi.It celebrated the beginning of spring, and the death of the children, particularly the maturing of the wine stored at the previous vintage, whose pithoi were now ceremoniously opened. 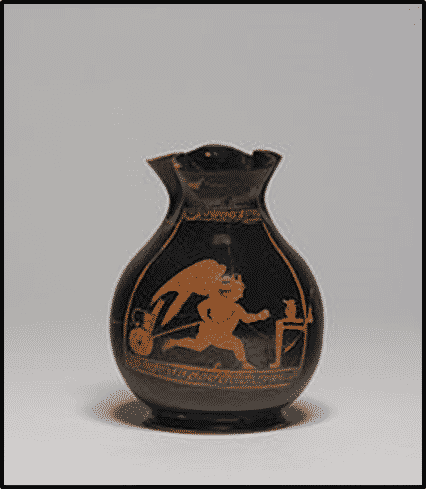 Given as gifts during the Anthesteria. They often depict children at play or mimicking adults, here a chubby Eros pulling a toy cart., Chous, Ceramic, circa, 410 B.C.E., Paris, Louvre

Kantharos is a cup used to hold wine, possibly for drinking or for ritual use or offerings. The kantharos seems to be an attribute of Dionysos, the god of wine, who was associated with vegetation and fertility.As well as a banqueting cup, they could be used in pagan rituals as a symbol of rebirth or resurrection. 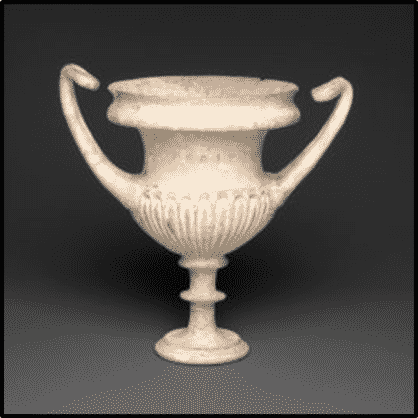