Traditional medicine of China has a long historical and cultural background dating back about 2500 years.  The ancient Chinese people were able to reach a level of social stability that included the ability to treat disease of emotional, physical, and spiritual origins.  Although a belief in spirits as the cause of disease has remained in China even to the present day, the view that the body obeyed a natural order struck a chord in the intellectual elite of ancient China.  It was this elite class that refined and developed these ideas over many centuries.(1)

The ideas that the ancient Chinese had about the organs of the body, and their functions, as well as the causes and development of 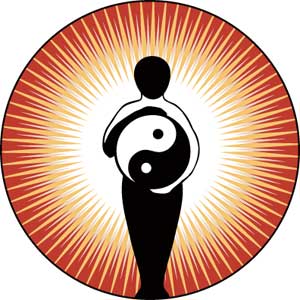 The Chinese do not think of theory, as we do in the West, as needing to be proven to reach the highest degree of truth.  A Chinese doctor can look at the kidney as a machine and think of it as a reflection of universe.(2)  He can apply two different disease classification systems, cold damage or warm damage where he feels it is appropriate, without being deterred by contradictions between the two.(3)

One (Western) method of gaining knowledge is analysis.  It is the method of breaking things into component parts to understand the whole.  This method has been applied in China, but not to the same level as in the West.  Analysis is one of the important features of all western modern science and technology.  In fact, the analytical approach is the basis of western medicine, and it is part of the Western mindset.(4)

Analysis is not as important to Chinese medicine as in the West.  The ancient Chinese did use analysis in their investigation of the human body, but to a lesser degree.  Analysis provided some important insights into the workings of the human body.  The ancient Chinese knew, for example, that the stomach and intestines were organs of digestion, and that the lung drew air from the environment.(5)

The origins of China’s medical knowledge is not certain. They observed phenomenon, and identified relationships and patterns.  They compared whole phenomena in the body, and watched how they related to each other.(6)

This is shown by “qi,” an entity that Westerners find hard to conceptualize, since it does not fit any known scientific category.(7)  Qi is thought to be the universal energy that runs everything, right down to the smallest molecule.  Pain is often thought of as blocked Qi.(8)  An example of qi would be that the ancient Chinese could see that when we are healthy, food is carried down the alimentary canal.  They also saw that throwing up involves a rising movement that ejects food from the stomach along with heaving.(9)  They saw this activity in terms of two movements: a normal descending force and an abnormal ascending force.  What we call a movement, the Chinese call qi.(10)   Stomach qi goes down, carrying food in the digestive tract to the small intestine.  The concept of stomach qi was inferred directly from visible events.

Qi does not coincide with the Western notion of energy.  Western medicine explains the normal downward movement of qi in terms of peristalsis (wave like contractions that pass along the alimentary canal, pushing the contents downward). Energy is consumed in the contraction of the muscles.  It is not ascending or descending energy. (11)

The Chinese developed a medicine of systematic correspondences in which yin-yang and five-phase theory provided a good foundation for understanding the body.  These have been the key elements of  Chinese medicine to the present day.(12)

The five phases: wood, fire, earth, metal, and water are the main factors in human life: wood for construction; fire for warmth; metal for tools; the earth that produces the crops necessary to our survival; and water on which all life depends.(13)  The ancient Chinese observed that these entities, all-important for the support of human life, reflected important aspects of nature as a whole.  Wood has the qualities of plants; fire has heat qualities and so so on.  The five phases also correspond to organs in the body.  These five entities also relate to each other in specific ways such as anything that burns is derived from plants, wood was said to engender fire; fire by reducing what it consumed to ashes, is said to engender earth, etc.(14)

Yin and yang constitute a binary system of correspondence that is logically matching to the five phases.  All yin phenomena are the same in nature and relate to their yang opposites in like fashion.  Examples of this would be day is to night as heat is to cold, as summer is to winter, as high is too low, as activity is to rest.(15)

The ideas of yin and yang became universally applicable categories of quality and relationship.  Cold and dark has something qualitative in common, and their relationship is counterpart to yin and yang.  Each pole of a yin-yang pair is dependent on the other and each complements the other.  There is no light without darkness; cold cannot be known without heat.  When cold increases, heat lowers, and when dawn breaks, darkness fades. (16)

In medicine, yin and yang are used to explain relationships between parts of the body, organs, and disease patterns.(17)  Making a correspondence between dark-light and interior-exterior, medical theoreticians were able to see that the interior of the body corresponds to dark as the exterior corresponds to light; so, interior would be yin and the exterior is yang.  By the principle of divisibility, they determined that within the interior of the body, some aspects were yin, while others were yang.  The organs having greatest contact with the outside (the digestive tract, for example) are seen to be yang within yin, whereas the organs that dealt with things produced by the body (blood, qi, and essence) were seen as yin within yang.(18)

There are four major treatments within these two key elements of Chinese medicine.  The first that will be covered is Tui Na or massage.  It contains elements and techniques that are very different from the common (western) ideas of massage.  In these massage techniques the practitioner tries to affect the physiology and energetic of the body and the mind of the patient.(19)

Tui Na is practiced slowly with an emphasis on the practitioner and the client being in a meditative state.  Stretching and extending the range of motion of the body is an important part of Chinese massage. (19)

A central part of Chinese medicine is the importance of the abdominal region.  According to Chinese medicine, all the major energy pathways of the body have their origin around the navel.  The abdominal massage is crucial to the healing benefit of this 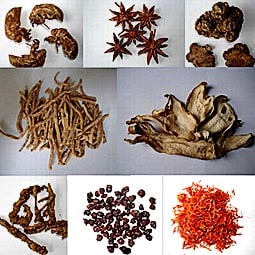 The second treatment is Herbology or minerals and animal parts.  Herbs are a variety of naturally found products that have medicinal properties.  Herbal formulas can be taken in many ways.  A doctor of Chinese herbal medicine could prescribe raw herbs which would be taken home and made into a “tea”.  It is believed that certain animal parts, when ingested, will contribute to the health of the same part in the patient.  Many practitioners offer herbs in pill or capsule form.  Herbal treatments are created for specific patients and their specific disharmony.(20)

The third treatment is nutrition therapy.  The only difference between nutrition and herbal therapy is that nutrition tends to be more appetizing than the herbal tea formulas.(21)

The fourth treatment is Acupuncture.  It is the gentle insertion of hair-fine needles into specific points on the body to stimulate the flow of Qi or the natural healing energy.(22)

Chinese medicine views human health and disease in terms of functional entities and disease-causing influences that are observed with just the senses.  Its sophistication lies in its observation of correspondences between whole phenomena, and its organization of these observations through the holistic systems of yin-yang and five phases.(23)