Colley Cibber was a comic actor and playwright with pretensions to tragedy (Colley 17-18). In 1700, he wrote and performed in an altered and slightly abridged version of Shakespeare’s Richard III, which was initially unsuccessful (probably because of overzealous government censorship) (Ashley 52). However, it soon became popular enough to eclipse the Shakespearean original on the stage (Ashley 47-48). It was the version used by the great English actor David Garrick in his stage debut (Colley 37). Even in the 20th century, it has been described as “deservedly the longest lived of the Restoration alterations and adaptations [of Shakespeare]” (Sprague and Trewin 56).

At least part, and perhaps the greater part, of the long-lasting success of Cibber’s Richard III may stem from its suitability to the theatrical 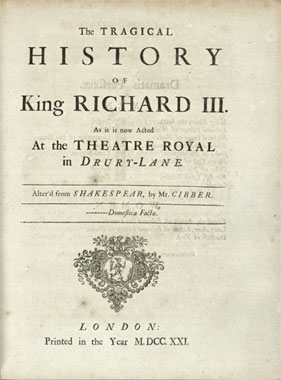 practices of the Restoration and subsequent periods. Cibber “was a man of the theater who well understood the necessary, though secondary, non-verbal aspects of production and staging” (Ashley 36).  Shakespeare may have been no less theatrical, but his plays were built around the peculiar and now mostly lost conventions of Elizabethan theater (Alice I. Perry Wood treats this subject very fully in the second chapter of her book). For example, scenes such as the “ghost scene” in the last act, in which (in Shakespeare) the ghosts appear subsequently to Richard and to his enemy the Earl of Richmond – who are present simultaneously on the uncurtained platform stage even though, in story, they are miles apart – were acceptable to Elizabethan audiences (Colley 29). However, upon the introduction of proscenium stages with front curtains, conventions like this began to fade (Wood 72). In Cibber’s play, only Richard is on stage when the ghosts appear.

Shakespeare’s original play required little in the way of scenery, props, and special effects, even compared to other dramas of its day (Wood 55). Cibber, on the other hand, was obliged to “compete in spectacle” with the other entertainments of his time, and his plays – his Richard III included – “gave scope to the designers of expensive costumes and elaborate settings” (Ashley 107). Shakespeare’s version, it may be, spoke chiefly to the ear, and Cibber’s chiefly to the eye, giving the latter a more immediate appeal to audiences.

There were a few attempts, during the 19th century, to stage the play more or less as Shakespeare wrote it. In England, there were at least three such attempts. Charles Macready made one such attempt “as a novelty” in 1821 (Ashley 48); it was “only a partial” restoration (Wood 124-24). Samuel Phelps produced a purer version in the 1840s, making canny use of stage technology to make Shakespeare’s version of the “ghost scene” effective on a proscenium stage (Allen 228-30). Henry Irving produced a shortened, but otherwise unchanged, adaptation from Shakespeare in 1877 (Wood 129-30), and Edwin Booth did the same (with his own version of the text) in the United States the following year (Wood 161-63). A biographer of Cibber says that Shakespeare’s play “recaptured popular favor” after Irving’s production, though he adds that “even in the twentieth century” some “played Cibber’s version in preference to the original” (Ashley 48).

Arthur Colby Sprague and J. C. Trewin refer to “the common 18th- and 19th-century promptbooks . . . which were either the work of Colley Cibber of with a strong admixture of his text” (36). This suggests a degree of cross-pollination – which does indeed seem to have occurred in 19th-century acting texts, even in versions which proclaim themselves to be based definitely on the work of one playwright or the other. For example, an 1847 acting edition of the play takes pains to distance itself from Shakespeare, explaining in its introduction that “Colley Cibber is the compiler of the present adaptation” (iii). In the main, it is Cibber’s version. Yet its rendering of Richard’s famous first soliloquy begins with the Shakespearean lines “Now is the winter of our discontent / Made glorious summer by the sun of York” (13; compare R3 I.i). A look at Cibber’s original adaptation shows that he omitted these lines (288).

Again, and perhaps more surprisingly, there seems to be a faint shade of Cibber even in Edwin Booth’s restoration of Shakespeare. William 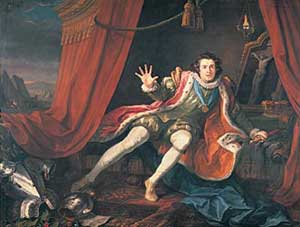 Winter, the editor of Booth’s prompt-book, boasts in his preface to it that “The innovations made by Colley Cibber . . . have been discarded” (3). Yet his version of the scene in which Richard learns of the Duke of Buckingham’s capture seems to show Cibber’s influence.

In Shakespeare’s version of this scene, Catesby enters and speaks four lines of news, of which the first is “My liege, the Duke of Buckingham is taken,” and Richard responds with four lines of his own, disposing of Buckingham in the third and fourth: “Someone take order Buckingham be brought / To Salisbury . . .” (IV.iv). In Cibber, this becomes a snappy two-line exchange: Catesby gives the same first line, but before he can continue with his report, Richard famously answers, “Off with his head. So much for Buckingham” (331, italics in the original). In Winters’s edition, the exchange is also two lines long. An anonymous officer enters and gives Catesby’s line, and Richard immediately answers, “Away with Buckingham to Salisbury!” (87). The words may be basically Shakespeare’s, but the structure of the scene bears Cibber’s stamp.

The dominance of Cibber’s version of the play, perhaps in the form of mingled texts like these, seems to have persisted for some time after the turn of the century. In 1920, one author admits that “Richard III, as acted to-day, is still Cibber’s, not Shakespeare’s” (Odell 55). Sprague and Trewin speculate that “there must have been a bridge period when a listener to Shakespeare’s original play would have sworn that it had been cut” because Cibber’s well-known additions were missing (36-37). When exactly this period occurred – when Shakespeare’s version regained the stage for good, despite lingering cultural memories of Cibber – isn’t clear, though Sprague and Trewin give a hint, suggesting that by 1930 Cibber’s version “had become a curiosity rarely shown” (56). In his Shakespearian Players and Performances, Sprague recalls in more detail a 1930 production of the play which was based substantially on Cibber’s text, but reverted to Shakespeare on some points: “Richard’s dying speech was omitted, and the murder of Clarence . . . was rather clumsily restored” (151).

Laurence Olivier’s 1955 film version, which credits Cibber for “interpolations” and also follows him in some omissions (such as excising the character of Queen Margaret), may be the last major production of Richard III in any medium to bear any significant Cibberian influence. I find it striking, though, that this film was produced after the half-century mark: Cibber’s text, in some form at least, continued to be performed for more than 250 years. However unfashionable his work may have lately become, Colley Cibber has already accomplished a rare feat of theatrical endurance.