“There is no exquisite beauty without some strangeness in the proportions” (Biography on Poe 8).  Edgar Alan Poe endured a very difficult life 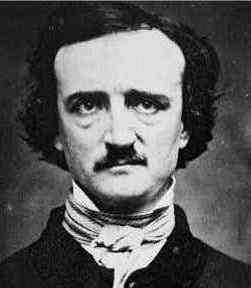 and this is evident in his literary style.  He was once titled the “master of the macabre.”  One of the aspects in his life with which he struggled was social isolation.  He used this as a topic in a number of poems and short stories. Poe’s life was also filled with periods of fear and irrationality. He had a very sensitive side when it came to the female gender, any woman he was ever close to died at an early age.  Another of his major battles, actually the only one he really lost, was his struggle with alcoholism.  Of all these topics, Poe’s favorites were the death of a beautiful woman, a feeling which he knew all too well, and the general topic of death. During Poe’s life, he experienced extreme social isolation.  These feelings of separation began when his father died or disappeared around the time of the birth of Poe’s sister, Rosalie.  The family then moved and he was separated from his older brother, who was left with relatives in Baltimore.  During those toddler years, Poe found his mother in the last stages of tuberculosis.  Upon her death, he was then separated from his younger sister, Rosalie.  Another major low point in his life was the death of his foster mother, Mrs. Frances Allan, and his foster father disowning him, all at one time.  The most significant set-back to Edgar Allan Poe was the death of his cousin/wife Virginia Clemm.

This single incident was the cause of almost all of his feelings of isolation in his in his adulthood.  He felt as though anyone he became close to would die. Poe wrote about isolation in many of his most popular works.  “A Dream Within a Dream” was not one of his more popular poems, but it discussed the difficult process of having to say good-bye to a loved one.  He also wrote, “The Raven,” in which the narrator went insane talking to a bird about losing his lost Lenore and realizing he was all alone.  A third poem in which Poe revealed to the reader his feelings of loneliness was, The Cask of Amontillado.  In this story, the main character Fortunato, was left to die in a tomb after being tricked by his love’s father.  Lastly, the poem, “Silence,” strongly suggested that he felt alone in the world, and was longing for companionship. Suffering through several periods of fear and irrationality during his life, Poe included those experiences in many of his more famous works.  One of these periods involved experiences in joining the army in order to get away from his foster father after the death of his foster mother.  Another of these times was his dismissal from the army which was actually on purpose; he missed all of his drills and was asked to leave immediately.  These periods of fear and irrationality were the cause of his misfortune and poor social status.

He was looked down upon by his peers for these episodes. “A constant theme of Edgar Allan Poe was madness” (“Short Stories,” 1995, p. 1).  Poe expressed this theme throughout almost all of his short stories and poems.  “Many of his stories exhibited abnormal states of mind and are constructed in terms of a single mad obsession” (Hervey 1).  His insane ways made his work stand out from the normal short story, or poem.  He was able to twist his stories and poems around in a way that almost seemed real, and was definitely intriguing.  An example of this could be found in the Black Cat.  The character took the eyes out of the first cat and then killed it.  After that he proceeded to “accidentally” kill his wife with an ax, and bury her in a wall.  Another example of Poe’s insanity demonstrated within his works was located in The Tell Tale Heart, where Edgar stalked a man and eventually killed him.  He then dismembered the body, took out his heart, and buried the man under the house. He later confessed to the police because he believed he could hear the heartbeat of the man. Formed very early in his life, Edgar Allan Poe had quite an attraction to females.  It began when his father left him at the age of two and never returned, thus he never had a real father role in his life.  A second contribution to his attraction to females evolved from his deep love for and close relationship with his foster mother whom he adored much more than his foster father. Poe’s closest friend, Virginia Clemm, was also his cousin and his wife. Poe’s works were greatly influenced by his deep admiration for the female gender.

In “The Raven”, the narrator was extremely distressed over his lost Lenore.  In the poem, “Elizabeth,” Poe had a secret hidden message. The message spelled out the name “Elizabeth Rebecca” using the first letters of each line moving down, vertically. This poem was a tribute to one of his lost loves.  A tribute to his foster mother was found in, “To Her Whose Name is Written Below.”  In this poem, Edgar used the second letter in each line to spell out “Frances Sergean Rosgood.”  He also wrote a poem entitled, “Lenore” to his lost love, Virginia.  This poem spoke about how beautiful she was, how young she was when she died, and also how he mourned for her.  In, “Annabel Lee,” written to his beloved Virginia, Poe states, “This maiden she lived by no other thought than to love and be loved by me.” Edgar Allan Poe had a genetic tendency toward alcohol.  His cousin viewed alcohol as the “curse of the Poes’.”  Disregarding much warning, he began to drink as a young man.  His drinking became worse when he attended the University of Virginia.  His reason for drinking was to escape the drudgery and disappointment of his life.  According to Thomas Poulter, Poe stated:  I have absolutely no pleasure in the stimulants in which I sometimes so madly indulge.  It has not been in the pursuit of pleasure that I have periled life and reputation and reason.

It has been the desperate attempt    to escape from torturing memories, from a sense of insupportable loneliness, and a dread of some strange impending doom. (2) Poe’s drinking had three major effects on his life: he lost his health, he lost his jobs, and he lost his dream of a magazine of his own.  “Poe was the first in a long series of American authors who felt a need to drink.  Alcohol ruined his life. He had no good jobs. He had no stable world. He had nothing to anchor him to reality, so he induced fantasies and drowned his fears with a bottle” (Poulter 4).    Poe’s works reflected what he thought about the evil of drinking.  Liquor played a major role in The Black Cat and The Cask of Amontillado.  The narrator of The Black Cat was a chronic alcoholic who in a drunken stupor  gouged out his cat’s eyes because he thought it was avoiding him.  In The Cask of Amontillado, Fortunato was lured by his love for wine to his death.  Poe attacked the use of alcohol because it was overpowering and destructive.  The characters in his works reflected his inability to enjoy the drug like most people and his regard for alcohol as an instrument of destruction.

The most defining factor in the path Edgar Allan Poe chose for his literature was the death of a loved one.  He experienced death at a very young age with his biological mother and possibly his father passing away before he turned three.  Another key loss was that of Virginia Clemm, his wife and cousin, at a young age.  Probably the most devastating loss in Poe’s life was his foster mother, Mrs. Frances Allan. One of the most popular topics for Edgar Allan Poe was that of death.  According to Steve Whitlatch, “Poe loved life, but his focus was mostly on death” (1).  He wrote some of the most horrific stories of all time including The Murders in Rue Morgue, The Tell-Tale Heart, The Black Cat, The Masque of the Red Death, and The Fall of the House of Usher.  The Murders in Rue Morgue was considered the first deductive mystery story about a detective who solved a series of murders in the Rue Morgue of Paris, France.  Another example of death in one of his works was The Tell-Tale Heart.  In this book, Poe spoke of a psycho who killed a man and buried him under the floor.  In his short story, The Black Cat, the main character killed his cat for avoiding him and accidentally killed his wife with an ax.  A prime example of his showcasing death as the major theme is found in the allegory, The Masque of the Red Death.  The main character, Fortunato, attempted to avoid the Red Death by pinning himself and 1000 of his friends inside his castle while the entire town around them died.  He soon realized there was an uninvited guest who turned out to be the Red Death and in turn each of the guests died.  Edgar Allan Poe’s difficult life was reflected in almost every work that ever left his pen.

His collection portrayed encounters of social isolation, periods of fear and irrationality, and extreme bouts with alcoholism. His obsession with the subject of death, particularly the death of a beautiful woman, was expressed in a majority of his works.  “The one thing certain is that no American writer of Poe’s distinction ever died a more lonely or pathetic death” (Poulter 3).