Edward Teller is a Hungarian-American physicist, known for his work on the hydrogen bomb. Teller was born in Budapest in 1908, and was educated in Germany at the Institute of Technology in Karlsruhe and at the universities of Munich and Leipzig.

He received his Ph.D. in physics in 1930. After working at the University of Goettingen with James Frank and at the Niels Bohr Institute, he 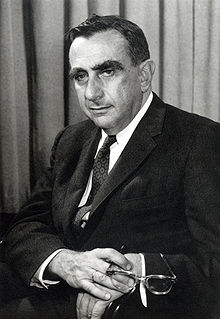 became Professor of Physics at the George Washington University in Washington, D.C. in 1935. In 1941 he became an American citizen. In the same year he joined the U.S. atomic bomb development project known as the Manhattan Project. For more than a decade he worked with the Italian-born physicist Enrico Fermi on this and succeeding projects at Columbia University, at the University of Chicago, and at Los Alamos, New Mexico. Edward Teller managed Los Alamos research on the “Super,” as he called the hydrogen bomb.

Destruction of Hiroshima and Nagasaki in Japan and the end of World War II slowed “Super” research. Teller, a strong anti-Communist and sensitive to U.S. and Soviet relations, pushed unsuccessfully to accelerate work on a super-bomb. He was frustrated by the post-war direction of Los Alamos. He accepted a University of Chicago professorship and left Los Alamos in October 1945. In April 1946, Teller returned to Los Alamos and led a secret conference on the “Super.” The conference reviewed his earlier work on fusion, which led to his full-time return to Los Alamos in 1949 to continue research on the hydrogen bomb. On January 31, 1950, President Truman approved hydrogen bomb development and testing, partly as a result of the first Soviet atomic test the previous August. In 1952 he became professor of physics at the University of California, Berkeley, and director of the Livermore, California, division of the university’s radiation laboratory (now Lawrence Livermore National Laboratory). He was the principal architect of the hydrogen bomb, first tested in 1952, and he strongly advocated that the United States continue the testing of thermonuclear weapons. He also made contributions to the application of nuclear explosives to peaceful uses. From 1954 to 1958, he served as Associate Director at the new Lawrence Livermore Laboratory.

He became a consultant to the laboratory in 1952. In 1975 he retired from teaching, but remained director emeritus of the radiation laboratory. After working on the production of the atomic bomb in the Manhattan Project, Edward Teller went on to become the principal designer of the hydrogen bomb. He remained a steadfast advocate of nuclear weapons testing throughout his life. In recent years, Teller has championed the “Star Wars” missile defense system, despite the fact that such a system is very expensive and has no conceivable way of working. Teller has written a few books. His books include Conversations on the Dark Secrets of Physics (Plenum Press, 1991), Better a Shield Than a Sword (Free Press, 1987), Pursuit of Simplicity (Pepperdine Press, 1980), and Energy from Heaven and Earth (W. H. Freeman, 1979). Teller has received numerous honors, among them the Albert Einstein Award, the Enrico Fermi Award, the Harvey Prize from the Technion-Israel Institute, and the National Medal of Science.