Foundations to 600 CE Trade Routes and their Connections 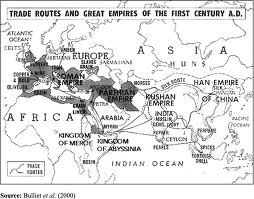 Commerce: Aromatic (incense), spices, gold, and “thousands of other things” (including wild animals)

Cite this article as: William Anderson (Schoolworkhelper Editorial Team), "Foundations to 600 CE Trade Routes and their Connections," in SchoolWorkHelper, 2019, https://schoolworkhelper.net/foundations-to-600-ce-trade-routes-and-their-connections/.