The book Dune has a science-fiction story line that associates two major themes frequently in the book.  The title and the setting of the book are used to establish the bleakness and isolation of the planet Arrakis.  The plot and resolution bring together the multiple factions including the emperor and the two major houses for control of the spice production. The title of the book Dune, plays a major part of the story.  The planet of Arrakis where most of the novel takes place, is a desolate, isolated spot in the universe which isn’t valuable for anything, but the spice.

The people on the planet have it hard because of the gigantic sand dunes and the indigenous sand worms which live under the sand.  The 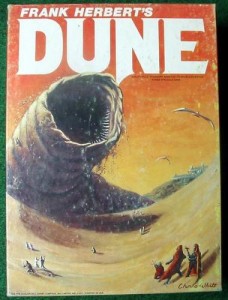 planet has no source of water on it except that of underground, which is very hard to come by.  As you can see, “Water is precious there.”  (pg. 30)   The plot of this science-fiction story deals almost entirely of the two major houses that at this time are sworn to destroy each other and the emperor. The two major houses want control of the spice on the planet of Arrakis which allows anyone who has it to fold space. Folding space means traveling anywhere in the universe without actually having to move.

The House of Attreides gets destroyed by the House of Harkonnens in the fight over the spice.  But on the planet of Arrakis, the local people of that world known as Fremen had had a prophecy that one day a savior would come and make peace where there was war on the planet of Arrakis. The duke’s son of the House of Attreides escaped during the fight for the planet and crashed landed on the dunes where the Fremen lived. The duke’s son, Paul, became their leader because of his great knowledge.  He learned to control the giant sand worms and use them to his own advantage.  The Fremen were determined to get rid of all the Harkonnens that ruled the world for one reason: the spice.

The Fremen made an attack and ended up destroying the Harkonnens using the sand worm’s help.  And once again, “The Fremen had the world.” (pg. 488) In the end, the title of the book had more to do with the story than anything else. The plot and resolution well summarized the story and pulled everything together.  The book Dune is an interesting and unique display of imagination that shows the fight between good and evil.