Guilt and How It Is Handled

Human beings have certain feelings.  The person at fault may feel guilty after the incident happens.  A feeling of guilt is the recognition of wrong doing, and the wish that the consequences of the action could be changed.  In The Scarlet Letter, Red Badge of Courage, and The Crucible, the main characters all have feelings of guilt as a result of what they have done.  Life on it’s own can also bring such inner feeling from within a person.  All people at one point or another feel guilty and have their own way of dealing with it.

In The Scarlet Letter, Dimmesdale feels guilty for his crime of adultery.  This character is not only guilty for what he does but also the fact that 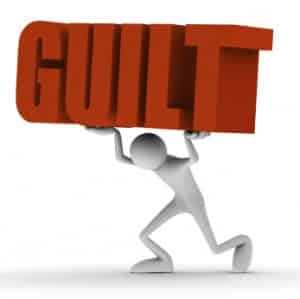 he does not confess to everyone in town.  By not admitting his responsibility, he increases his guilt because Hester must endure all the blame.  Dimmesdale’s guilt eats away at him and leads to his doom.  On the other hand, the adulteress handles the guilt by telling other people and showing them that she feels guilty.  The people forgive her after time but Dimmesdale still feels guilty, and since time has passed can not face the truth.  A situation that creates guilt can also illustrate how people deal with difficulty.

Guilt does not only appear in literature, but also in daily life.  A famous case is the O.J. Simpson murder trial.  Whether he committed the crime or not, O.J. has shown no signs of guilt.  This can be interpreted as meaning that he either did not commit the crime, or he did so but is hiding the guilt.  If the second situation is true, then he has emotional scars that do not show exactly like Dimmesdale.  A more common example takes place in schools.  Sometimes a student will cheat on a test, but not be able to feel a sense of accomplishment about the grade.  Guilt has overcome this student and made it difficult to enjoy the success of a good grade because it was obtained dishonestly.  Sometimes teachers who favor one student over another experience guilt.  This can be seen when they may be inclined to be biased against the student they were favoring.

Red Badge of Courage shows that even though guilt exists during wartime, it can happen in any situation.  Henry feels guilty for leaving the tattered man by himself, even though it may have been the best thing for him at the moment.  Guilt shows itself when a person feels that they could have done something but did not, and later reflect back on their choices.  Henry also exhibits guilt after retreating, when he wonders if he if he should have done so.  He cannot decide if he should return or just never go back for fear of ridicule by his comrades.  After Henry realizes that he has something to make another person feel guilty for being afraid, he uses it to his advantage to avoid the guilt he feels about running away.

People should express their emotions and not keep them bunched up inside, or it will lead to their demise.  Guilt affects each individual differently and how they react to it can change their life drastically.  The individual has to realize that once the event has happened, they cannot change it so there is no need to drive themselves crazy about it.  Guilt can shape a person for better or the worse, but how it is dealt with is the true indication of a person’s character.  People who make mistakes need to face their guilt, and deal with it in it the right way without being self centered

Cite this article as: William Anderson (Schoolworkhelper Editorial Team), "Guilt and How It Is Handled," in SchoolWorkHelper, 2021, https://schoolworkhelper.net/guilt-and-how-it-is-handled/.