Heinrich Himmler: Head of Gestapo, Waffen-SS, Minister of the Interior

Reichsfuhrer-SS, head of the Gestapo and the Waffen-SS, Minister of the Interior from 1943 to 1945 and organizer of the mass murder of Jews in the Third Reich, Heinrich Himmler was born in Munich on 7 October 1900. The son of a pious, authoritarian Roman Catholic schoolmaster who had once been tutor to the Bavarian Crown Prince, Himmler was educated at a secondary school in Landshut.

He served as an officer cadet in the Eleventh Bavarian Regiment at the end of World War I, later obtaining a diploma in agriculture from 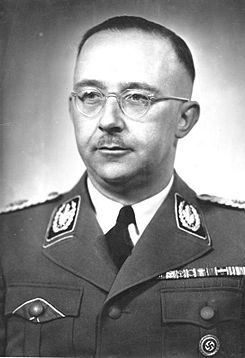 Munich Technical High School where he studied from 1918 to 1922. After working briefly as a salesman for a firm of fertilizer manufacturers, the young Himmler joined a para-military, nationalist organization and participated in the Munich Beer-Hall putsch of November 1923 as standard-bearer at the side of Ernst Rohm, Secretary to Gregor Strasser and his deputy district leader in Bavaria, Swabia and the Palatinate, he was also acting propaganda leader of the NSDAP from 1925 to 1930.

After marrying in 1927, Himmler returned to poultry farming for a time but was singularly unsuccessful in the business of raising chickens. In January 1929 he was appointed head of Hitler’s personal bodyguard, the black-shirted Schutzstaffel (SS), at that time a small body of 200 men which was subsequently to become under his leadership an all-embracing empire within the Nazi State. Elected in 1930 to the Reichstag as Nazi deputy for Weser-Ems, Himmler concentrated on extending SS membership – which reached 52,000 by 1933 – and securing its independence from control by Rohm’s SA, to which it was initially subordinated. He organized the Security Service (SD) under Reinhard Heydrich, originally an ideological intelligence service of the Party, and together the two men ensured that the Nazis consolidated their power over Bavaria in 1933.

In March 1933 Himmler was appointed Munich Police President and shortly afterwards he became Commander of the political police throughout Bavaria. In September 1933 he was made Commander of all political police units outside Prussia and, though formally under Goering , became head of the Prussian Police and Gestapo on 20 April 1934. The turning-point in Himmler’s career was his masterminding of the purge of 30 June 1934 which smashed the power of the SA and paved the way for the emergence of the SS as an independent organization charged with ‘safeguarding the . . . embodiment of the National Socialist idea’ and translating the racism of the regime into a dynamic principle of action.

By 17 June 1936 Himmler had successfully completed his bid to win control of the political and criminal police throughout the Third Reich, becoming head of the Gestapo in addition to his position as Reichsfuhrer of the SS. A very able organizer and administrator, meticulous, calculating and efficient, Himmler’s astonishing capacity for work and irrepressible power-lust showed itself in his accumulation of official posts and his perfectioning of the methods of organized State terrorism against political and other opponents of the regime. In 1933 he had set up the first concentration camp in Dachau and in the next few years, with Hitler’s encouragement, greatly extended the range of persons who qualified for internment in the camps. Himmler’s philosophical mysticism, his cranky obsessions with mesmerism, the occult, herbal remedies and homeopathy went hand in hand with a narrow-minded fanatical racialism and commitment to the ‘Aryan’ myth. In a speech in January 1937 Himmler declared that ‘there is no more living proof of hereditary and racial laws than in a concentration camp. You find there hydrocephalics, squinters, deformed individuals, semi-Jews: a considerable number of inferior people.’ The mission of the German people was ‘the struggle for the extermination of any sub-humans, all over the world who are in league against Germany, which is the nucleus of the Nordic race; against Germany, nucleus of the German nation, against Germany the custodian of human culture: they mean the existence or non-existence of the white man; and we guide his destiny’.

Himmler’s decisive innovation was to transform the race question from ‘a negative concept based on matter-of-course anti- semitism’ into ‘an organizational task for building up the SS’. Racism was to be safeguarded by the reality of a race society, by the concentration camps presided over by Himmler’s Deaths Head Formations in Germany, just as during World War II the theories of ‘Aryan’ supremacy would be established by the systematic extermination of Jews and Slavs in Poland and Russia. Himmler’s romantic dream of a race of blue-eyed, blond heroes was to be achieved by cultivating an elite according to ‘laws of selection’ based on criteria of physiognomy, mental and physical tests, character and spirit. His aristocratic concept of leadership aimed at consciously breeding a racially organized order which would combine charismatic authority with bureaucratic discipline. The SS man would represent a new human type – warrior, administrator, ‘scholar’ and leader, all in one – whose messianic mission was to undertake a vast colonization of the East. This synthetic aristocracy, trained in a semi-closed society and superimposed on the Nazi system as a whole, would demonstrate the value of its blood through ‘creative action’ and achievement.
From the outset of his career as Reichsfuhrer of the SS, Himmler had introduced the principle of racial selection and special marriage laws which would ensure the systematic coupling of people of ‘high value’. His promotion of illegitimacy by establishing the State-registered human stud farm known as Lebensborn, where young girls selected for their perfect Nordic traits could procreate with SS men and their offspring were better cared for than in maternity homes for married mothers, reflected Himmler’s obsession with creating a race of ‘supermen’ by means of breeding. Himmler’s notorious procreation order of 28 October 1939 to the entire SS that ‘it will be the sublime task of German women and girls of good blood acting not frivolously but from a profound moral seriousness to become mothers to children of soldiers setting off to battle’ and his demand that war heroes should be allowed a second marriage expressed the same preoccupation.

The small, diffident man who looked more like a humble bank clerk than Germany’s police dictator, whose pedantic demeanor and ‘exquisite courtesy’ fooled one English observer into stating that ‘nobody I met in Germany is more normal’, was a curious mixture of bizarre, romantic fantasy and cold, conscienceless efficiency. Described as ‘a man of quiet unemotional gestures, a man without nerves’, he suffered from psycho-somatic illness, severe headaches and intestinal spasms and almost fainted at the sight of a hundred eastern Jews (including women) being executed for his benefit on the Russian front. Subsequent to this experience, he ordered as a ‘more humane means’ of execution the use of poison gas in specially constructed chambers disguised as shower rooms.

The petty-bourgeois eccentric whose natural snobbery led him to welcome old aristocratic blood into the SS, revived a web of obsolete religious 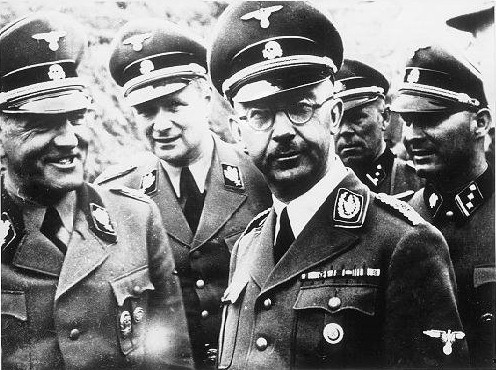 and cosmological dogmas linking new recruits to their distant Germanic ancestors. He cultivated the ‘return to the soil’ and the dream of German peasant- soldier farms in the East while at the same time proving himself a diabolically skilful organizer of rationalized modern extermination methods. The supreme technician of totalitarian police power who saw himself as a reincarnation of the pre-Christian Saxon, Henry the Fowler, advancing eastwards against the Slavs – he organized the thousandth anniversary of Henry’s death in 1936 – Himmler perfectly expressed in his own personality the contradictions of National Socialism. For him, the SS was at one and the same time the resurrection of the ancient Order of the Teutonic Knights with himself as grand master, the breeding of a new Herrenvolk aristocracy based on traditional values of honor, obedience, courage and loyalty, and the instrument of a vast experiment in modern racial engineering. Through this privileged caste which was to be the hard core of German imperial dominion in Europe, the nucleus of a new State apparatus would emerge with its tentacles impinging on all spheres of life in the expanded Third Reich. By recruiting ‘Aryans’ of different nationalities into his Waffen-SS Himmler envisaged the creation of ‘a German Reich of the German Nation’ based on the feudal allegiance of its communities to the lordship and protection of the Fuhrer, embodying a Germany that would become the centre of a higher political entity.

By the end of the 1930s the possibility of forging this Greater Germanic Reich of the future came closer to realization as Himmler reached the peak of his power. In October 1939 Hitler appointed him Reichskommissar fur die Festigung des Deutschen Volkstums (Reich Commissar for the Strengthening of Germandom) and he was given absolute control over the newly annexed slice of Poland. Responsible for bringing people of German descent back from outside the Reich into its borders, he set out to replace Poles and Jews by Volksdeutsche from the Baltic lands and various outlying parts of Poland. Within a year over a million Poles and 300,000 Jews had been uprooted and driven eastwards. With the characteristic self- pitying and ascetic ethos of self-abnegation that he inculcated into the SS, Himmler informed the SS-Leibstandarte Adolf Hitler Regiment: ‘Gentlemen, it is much easier in many cases to go into combat with a company than to suppress an obstructive population of low cultural level, or to carry out executions or to haul away people or to evict crying and hysterical women.’ It was Himmler’s master stroke that he succeeded in indoctrinating the SS with an apocalyptic ‘idealism’ beyond all guilt and responsibility, which rationalized mass murder as a form of martyrdom and harshness towards oneself.

Himmler was captured and scheduled to stand trial with other German leaders as a war criminal at Nuremberg, but on 23 May committed suicide in Lüneburg by means of a potassium cyanide capsule before interrogation could begin.