His voyage towards individualism in the novel Fathers and Sons by Ivan Turgenev, Arcady plays a major role both in his own life and the lives of others. Arcady, despite the shield he surrounds himself with, is not a true Nihilist like his friend Bazarov through his thoughts and actions we see his change. To begin, Arcady shows signs of Romanticism early on in the novel despite the announcement of his Nihilist beliefs. For example, Bazarov and Arcady were walking one afternoon in the garden and overheard Nicholas playing his cello. “At that instant the lingering notes of a ‘cello were wafted towards them from the house . . . and, like honey, the melody flowed through the air” (49). Like a true Nihilist, Bazarov immediately denounced the act of playing music as a purely romantic institution. “Good Lord! At forty-four, a pater familias, in the province of X, playing the ‘cello! Bazarov continued to laugh: but, on this occasion, Arcady, though he venerated his mentor, did not even smile” (50). By this we see that although Arcady looks up to Bazarov, he truly does not uphold the Nihilist beliefs as strongly or as strictly. His acceptance of his father’s cello playing shows that Arcady, unlike Bazarov, He does not find music a purely romantic institution, but an enjoyable way! To be merry.

Also this incident shows us that Arcady does not like when others poke fun at his family. Here, he obviously does not think his 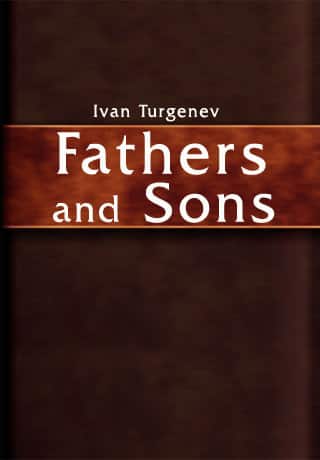 father’s cello playing is a laughing matter. Secondly, Nihilist ideas included the belief that love is outdated. Arcady went against this belief when he fell in love with Anna Sergeyevna and later, her sister Katya. Arcady even went so far as to tell Katya, in his own way, that he truly loved her. “It may be all the same to you, but I should like to state that, far from having any preference for your sister, I wouldn’t exchange you for anyone else in the world” (174). Bazarov also fell in love with Anna Sergeyevna but realized that she would not love him back. “‘I must tell you that I love you stupidly, madly . . . . You have forced me. Now you know.’ Madame Odintzov was filled with fear as well as a feeling of compassion for him. But she at once disengaged herself from his embrace an instant later she was already standing distantly in the corner and gazing at him. ‘You misunderstood me,’ she whispered hastily in alarm. She looked as though she might scream if he took another step (108).” And so, he retur! ned to his Nihilist beliefs. Arcady’s falling in love with Katya and his proposal to her was his second step towards becoming an individual. It showed that he no longer followed Bazarov like an impressionable child would an older sibling. He now began to make large decisions on his own which affected his life in a big way. Arcady, through his understanding of Bazarov’s arrogance, took his third and final step towards becoming his own person. “It is not for the gods to glaze pottery . . . . Only now, at this very instant, was the whole bottomless pit of Bazarov’s arrogance and pride revealed to him. ‘So you and I are gods? Or rather, you are a god and I’m a mere lout, isn’t that so?’ ‘Yes,’ Bazarov repeated firmly. ‘ You’re still stupid.'” (112). Not only does this remark allow Arcady to see that Bazarov had never considered him an equal, but also that Bazarov believed himself a god dwelling above all others.

This prompted Arcady to reconsider his relationship with Bazarov. He realized they were never friends, but only mere traveling companions on the road of life. Arcady seemed to realize also that he was never a pure and true Nihilist. He had been drawn into that particular way of thinking by his mentor, Bazarov, not his willingness to uphold Nihilism. Turgenev does a very good job in showing the changes taking place within Arcady. His true nature is slowly revealed throughout the book and we see his way of thinking by reading about his actions. Arcady is truly a dynamic character, as can be seen by his Nihilist beliefs changing into romantic ideas. Arcady enjoys beautiful language and is also a bit of a philosopher. For example, his description of a falling leaf: “Look! A withered maple leaf has left its branch and is falling to the ground its movements resemble those of a butterfly in flight. Isn’t it strange? The saddest and deadest of all things is yet so like the gayest and most vital of all creatures” (134). By the conclusion of the novel, we see that Arcady was part of the novel because he had the most influence on others as well as on himself, and also because he had the most to learn from life’s experiences. He has established a life of his own. A life where he is free from Bazarov’s hold and Nihilist! ideas, and a life where he is free to be himself. His voyage: completed.