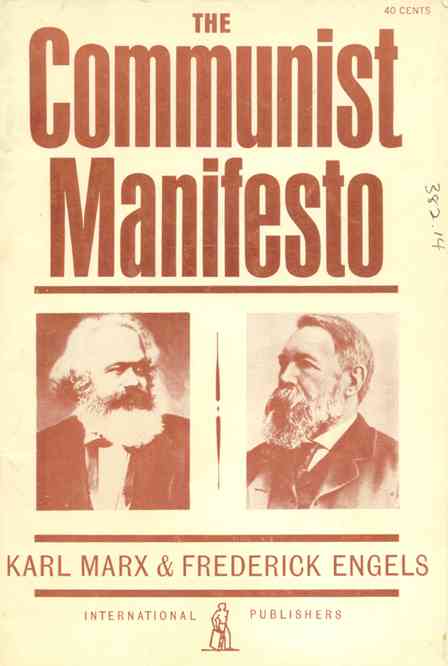 Karl Marx and Freidrich Engels were leading Prussian political theorists who developed Communism in the mid-19th century. Their most famous work, The Communist Manifesto was produced for the Communist League in 1848 in Brussels after Marx had been expelled from Prussia and France for his radical leftist beliefs.

The Communist Manifesto argues that class struggles or the exploitation of one class by another was and still is the motivating force behind every historical development and of how class relationships are defined by an era’s means of production. Marx and Engels cite examples of this constantly reoccurring phenomenon throughout European history; the ancient world’s aristocrat and commoner, Rome’s slave economy, Medieval Europe’s feudal system etc.  In each case, every era ended “either in a revolutionary reconstitution of society at large, or in the common ruin of the “contending classes.”  Marx believed that the Industrial Revolution had only simplified the class-based struggle that is the “history of all hitherto existing society.”  He believes that this most recent class-struggle between the Bourgeoisie [capitalist class] and the Proletarians [working-class labourers] is nothing more than  “naked, shameless, direct, brutal exploitation” that ”has left remaining no other link between man and man than callous ‘cash payment’ “

While Marx and Engels praise capitalism for its remarkable accomplishments. They also argue that capitalism itself has its own history and thus, is not in the inherent nature of human beings but rather a phase in human development(Ball and Dagger PG: 232), which ultimately culminates in the overthrowing  of the bourgeoisie by the proletariat. They compare the mid-19th workplace to earlier times such as the middle ages, where workers were spread out across the countryside and thus divided in comparison to the industrial revolution, where masses of workers would be gathered gathered onto a single work site and trained to work as a team. Outside of the workplace, people were starting to move from the countryside into urban centres in order to find work. These industrial cities brought the working class together and for Marx and Engels, it provided the recipe for the revolution against the system and their masters.

The Manifesto had little direct impact on the 1848 revolutions. As they had already effectively broken out when the book was published and events in France were the single largest factor in spreading the revolution to the rest of Europe. Nonetheless, The Communist Manifesto had an incredible impact on the way people thought. Politically, it dramatically affected the course of history. For example, its teachings helped to spark the Russian Revolution. In the mid-20th century when Sino-Soviet communism was at its peak, more than one third of the world lived under a Marxist regime during. Marx and his followers were also responsible for the development of the first social safety nets, as they were first developed by Otto Van Bismarck in an attempt to curb the rapidly growing communist movement.  Marx’s influence, whether for the better or for the worse, was certainly felt in the world.