Kurt Vonnegut Jr., was born November 11, 1922, in Indianapolis, Indiana(Dictionary of Literary Biography). Kurt is often known for his science-fiction writing. He often uses space travel and technology within his novels (World Book Encyclopedia). Vonnegut attended Cornell University from 1940 to 1942. Next, he attended the University of Chicago from 1945 to 1947. He was awarded a masters degree in 1971 in anthropology. Also in 1945, he was wed to Jane Marie Cox. Kurt and Jane had three children, Mark, Nannette and Edith(Dictionary of Literary Biography).

In 1947, Kurt moved to Schenectady, New York to work for General Electric Research Laboratory as a public relations writer. It was 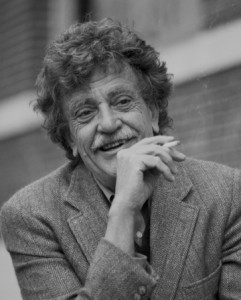 here that he wrote his first novel, Player Piano. Vonnegut’s next move was resigning from his job to fulfill his dream. He moved to Provincetown, Massachusetts so he could concentrate on his writing. For the next seven years Vonnegut worked on novel titled “Upstairs and Downstairs.” He never did finish this novel. He received income by starting a Saab dealership and writing short stories. Becker 2 In 1957, his father died of lung cancer. His sister and her husband soon died which would one day lead him to write the novel Slapstick. Kurt Vonnegut’s writing style is exemplified in the novel Slaughterhouse-Five.

This novel also shows Vonnegut’s view on war. He entered World War II in 1939 and stayed there for the remainder of the war. Vonnegut was captured by the Germans and imprisoned in Dresden, Germany. He witnessed first-hand the bombing of Dresden by the British and Americans. He uses Slaughterhouse-Five to show that the human race has a tendency to inflict destruction on itself(World Book Encyclopedia). Before he wrote Slaughterhouse-Five, he published The Sirens of Titens in 1959. This was a story about a playboy millionaire that is destined to become a space traveler. The millionaire man was taken to Mars. Some regard this novel as Vonnegut’s best novel.  Next, Vonnegut signed a two-book contract with Fawcett. This contract was supposed to cover Canary in a Cat House and Mother Night.

Canary in a Cat House was a series of twelve short stories that were published by other magazines. Mother Night emerged in 1962. This is one of few novels that does not involve any science-fiction or technology. Cat’s Cradle was his next novel. It was published in 1963. This story involves a researcher at General Electric. Becker 3 This novel shows how much Vonnegut uses his real life experiences. He uses war examples, the numbers of kids he has and the places he has lived. On October 7, 1970, he opened his first play Happy Birthday, Wanda June. This play lasted on Broadway until March 14, 1971. One major criticism of this play is that women don’t have any dignity in it. Kurt Vonnegut Jr. had a couple of other major works such as Breakfast of Champions and Slapstick, however, both received negative reviews(Dictionary of Literary Biography). Vonnegut has a different style of writing. This trait makes him unique. Towards the end of his career, his works were highly criticized which was why his reputation has been partially ruined.