A little over a century ago a gruesome double murder was committed, in the 2-½ story house at 92 Second Street, in Fall River, Massachusetts. This crime shocked the nation as Lizzie Borden, a 32-year-old Sunday school teacher, went on trial for the murder of her father and her stepmother. An all male jury eventually acquitted her on the accusations. To this day, the murderer of Andrew J. Borden and Abby Gray Borden is still unknown, but in the public mind everyone believes it was Lizzie Borden.

Lizzie was born and grew up in Fall River, Mass. She was the youngest daughter of Andrew Jackson Borden, who was a very 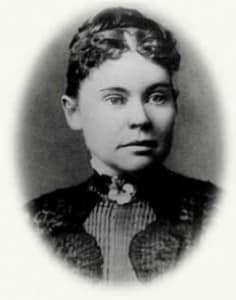 successful Banker and Sarah Morse Borden. Sarah died when Lizzie was very young and Andrew then married Abby Durfee Gray. Lizzie grew up with an elder sister, Emma. Neither of them has ever married. The sisters hated their stepmother, mainly because of the family’s inferior social position.

On the day of August 4, 1892, the bodies of Andrew Borden and his wife were found mutilated. As opposed to 40 whacks, in the popular rhyme, 19 blows struck Abby Borden by a hatchet or axe to the back of her head and neck. At the time she was cleaning the guestroom of the family home, at 9:30 am. Andrew Borden, who had returned home around 10:30 am, after his daily business had been attended to, was either napping or reading the newspaper on a couch in the parlor, when he was attacked. 11 blows were rained upon Mr. Borden’s head and face, to the point that one eye hung from its socket upon his cheek, and his close friend and physician, Dr. Bowen, couldn’t recognize him.

There were only two people in or about the house at the time of the killings, Lizzie Andrew Borden and Bridget Sullivan, the Borden’s maid. There is some speculation as to others that may have been responsible for these heinous acts. Among the other alleged killers are John Morse, the brother of Andrew’s first wife, a secret lover Lizzie was said to have, though never named, Emma Borden, Lizzie’s elder sister, and William Borden, who, while legally Andrew’s second cousin, was rumored to really be his illegitimate son.

Soon after the murders, Lizzie emerged as the prime suspect after John Morse’s alibi checked out. She then was arrested and tried on three counts, the murder of Abbey, of Andrew, and of them both and, if found guilty, faced death by hanging. Six days after the murders occurred, she went to court. The all-male jury was put into a difficult position. It was the Victorian Era where women were considered delicate flowers and not capable of killing someone and it was not a common or working class woman they were to judge guilty or innocent, it was a wealthy society lady. After only an hour of deliberating, the jury declared Lizzie to be not guilty. It is said it only took them 15 minutes to decide, but out of respect for the prosecution, they waited another 45 minutes before they informed the court of their decision.

What makes the Fall River murders so perplexing is that the motive, the weapon and the opportunity for such a crime are all seemingly absent. When the Fall River constabulary investigated the murders, they found no money or jewelry missing, not even small amounts of change or the packet of bus tickets as were taken in the daytime break-in at the Borden home twelve months earlier. Later, Prosecuting Attorney Knowlton hired a machinist who spent two days cracking open Andrew Borden’s safe in hopes of finding a missing will disinheriting both daughters. But Borden died intestate, leaving Lizzie and Emma to inherit his entire fortune.

Besides the lack of a clear motive for the murders, there was also the disconcerting lack of opportunity. Fall River found the entire Borden house locked up as usual, and during the two-and-a-half-hour period in which both murders were completed, the maid Bridget was outside the house washing windows and daughter Lizzie was inside the house reading a magazine. Even if one of the two committed the crime, the violent and bloody act should have been noisy enough to attract the attention of the other.

Shortly after the trial, Emma and Lizzie each inherited half of their father’s estate, about $200,000.00 each, a large sum in those 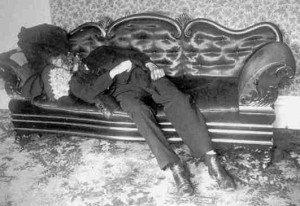 days. Their first purchase was a home on The Hill, at 7 French Street, which Lizzie named Maplecroft. While at the time, Lizzie was said to have never had a thought of moving away from Fall River, in her later years, friends said she had questioned her decision to stay. Lizzie became a social outcast after the trial, with few friends remaining loyal. Her every move was scrutinized: if she appeared solemn in public, it was because she was guilt-ridden because of her crime; if she was happy, it proved she was a heartless monster. Soon, the only shopping trips she made were to the larger cities, such as Boston, Providence and New York.

Lizzie refused to give newspaper interviews, in the hope that perhaps the attention that was constantly focused upon her would go away. But people were always hungry for gossip about Lizzie, and the papers were all too happy to print any and all rumors that were circulating about her, and if there weren’t one, the paper would create a new piece of gossip. Among these rumors were tales of supposed engagements and accusations of shoplifting. These papers never seemed willing to print tales of her good deeds, such as her many charitable donations, her aide to deserving young people who could not afford a college education. Nor did they print stories of her love of animals, or of the arts.

Lizzie enjoyed going to the theatre, and was an avid fan of Nance O’Neil, a stage and silent film actress of the day. It was a party thrown for Nance and the members of her acting troupe that caused Emma to move from Maplecroft in 1905. Emma, being a quiet and timid woman, simply could not abide by the rowdiness of Lizzie’s newfound friends.

Little has been written about the friendship between Lizzie and Nance, though rumors abound that they were in fact lovers for a brief time. It is nearly impossible to say whether or not this is true. At the same time, however, Lizzie may have become very lonely. How many men were likely to call on a woman that may have killed her father and stepmother? Perhaps out of desperation, Lizzie sought comfort and love in the arms of another woman.

By many reports, Lizzie and Emma had little or no communication after Emma left Maplecroft. Emma moved to Newmarket, New Hampshire, and the two sisters never saw each other again. Lizzie died on June 1, 1927, at the age of 67. Emma did not attend the funeral, because on the day of Lizzie’s death, she had fallen and suffered a broken hip. Emma died on June 21, 1927 at the age of 76, just ten days after Lizzie. Both were buried in the Borden family plot, in Fall River’s Oak Grove Cemetery. Andrew Borden lies between Sarah and Abbey, his wives, while Lizzie and Emma are at his feet. A grant made to the city of Fall River in Lizzie’s will pays for the perpetual upkeep of the plot.