“Whales provide us with the food for our bodies, bones for our tools and implements and spirits for our souls.” “We haven’t hunted the whale for 70 years but have hunted them in our hearts and in our minds.” “Whales are a central focus of our culture today as they have been from the beginning of time.” This has been a tradition of the Makah Indians for more than 2000 years.

They had to stop in 1926 due to the scarcity of gray whales. But their abundance now makes it possible to resume their ancient 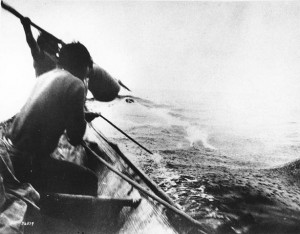 practice of the hunt. They have had an intensification of interest in their own history and culture since the archeological dig at their village of Ozette in 1970, which uncovered thousands of artifacts bearing witness to their whaling tradition. Whaling and whales have remained central to Makah culture. They are in their songs, dances, designs, and basketry. Their social structure is based on traditional whaling families. The conduct of a whale hunt requires rituals and ceremonies, which are deeply spiritual. And they believe hunting imposes a purpose and a discipline, which they believe, will benefit their entire community, especially the young, whom the Makahs believe to be suffering from lack of self-discipline and pride.

Why the Makahs have the right to hunt gray whales?

Before entering into negotiations with the Makah for cessions of their extensive lands on the Olympic peninsula in 1855, the United States government was fully aware that the Makahs lived primarily on whale, seal and fish. When the United States Territorial Governor, Isaac Stevens, arrived at Neah bay in December of 1855 to enter into negotiations with the Makah leaders, he was met with strong declarations from them that in exchange for ceding Makah lands to the United States they would be allowed to hunt whale. They demanded guarantees of their rights on the ocean and specifically, of the right to take whale. The treaty minutes show Governor Stevens saying to the Makahs: “The Great Father knows what whalers you are— how you go far to sea to take whale. Far from wanting to stop you, he will help you – sending implements and barrels to try the oil.” He went on to promise U.S. assistance in promoting Makah whaling commerce. He then presented a treaty containing the specific guarantee of the United States securing the right of the Makahs to continue whaling. Article 4 of the treaty of Neah Bay, 1855 states “the right of taking fish and of whaling or sealing at usual and accustomed grounds and stations is further secured to said Indians.” This treaty was ratified by Congress in 1855 and has since been upheld by all Courts and the Supreme Court.

Will whaling by the Makah affect the gray whale population?

Whale scientists have closely observed this species for many years and in 1993 determined that the gray whale population had exceeded the numbers existing before industrial whaling on this species began. In 1994 the gray whale was removed from the endangered species list. The 1996 population estimate was 22,263 whales. This population continues to increase at a rate of about 2.5% per year, despite continuous harvesting of about 165 gray whales a year by Russian Aborigines – the Chukotki, for the last 30 or 40 years. The Makah hunt would be an infinitesimal expansion of global whaling – up to five a year out of approximately 1,000 killed worldwide. No reputable biologist or whale scientist has suggested that the Makahs taking five whales a year will present any conservation threat whatsoever to the gray whale stock. In fact no one can legitimately argue that this is a conservation threat, which is one of the primary reasons why two of America’s leading conservation organizations have refused to join in the attack on Makah whaling: The Sierra Club and Greenpeace. There are animal rights activists within those organizations who are trying to get 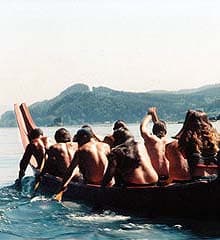 them to come out against makah whaling. But they have steadfastly refused because they do not see this as a conservation issue, they refuse to be drawn into the animal rights issue and will not oppose indigenous people’s rights.

Animal rights groups have been scaring each other and pumping up the claim that if the Makah whale than it will mean the collapse of all restrictions against commercial whaling and whaling will be resumed everywhere. This is all hype. If there are other indigenous peoples who have a legitimate whaling culture and a whaling tradition than they should be allowed to whale just as the Makah. The rest is all hype started by anti-whaling organizations to try to stop the Makah from killing a single whale. Why they use modern methods? The Makahs use modern methods because it is more humane. Their ancient methods required them to shoot numerous harpoons into the whale and could take many hours and even up to days to accomplish.

The leader of the pack attacking the Makahs is the Sea Shepherd Conservation society. They have been responsible for a steady stream of propaganda designed to inflame the public. This propaganda is often misleading, bigoted and usually an out and out lie. “Sea Shepherd is ardently opposed to the killing of all whales. Particularly in the transparent justification of bringing back traditional rituals and ceremonial values.” Now if I were a Makah I would find that statement extremely bigoted and offensive. Especially coming from the same liberals who are teaching our kids to embrace multiculturalism and celebrate our differences. To understand and tolerate those with different cultures, ideas, customs, and religions. Yet at the same time they refer to Makah traditions and values as “immoral”, “outdated” and even “barbaric”. “The Makah proposal is part of an international trend in using aboriginal justification to circumvent the moratorium against the commercial trade in whale meat.” White people have been enjoying beef since the beginning of time and nobody seems to mind and I sure haven’t heard those swash buckling saviors of the sea complaining about that. Why should a whale deserve special rights over a cow? Since it is obviously not a conservation issue. The fact is sea shepherd is trying to romanticize the whale and ascribe almost human characteristics to it. And the truth is the only right either of these two animals has is to be eaten. “Their own elders, the traditional leadership of this historically matrilineal society, are convinced that the push for whaling is being led by a few money-hungry corporate-savvy businessmen who do not represent the tribe at large.” That is a lie. Whaling is supported by the overwhelming majority of the tribe. In 1995, there was a tribal referendum on this issue and 85% of those voting favored whaling. In the most recent tribal election for a seat on the five-member council. One of the most steadfast opponents of whaling ran for office, but received only 35 votes out of 360 cast. “Additionally, the precedent that whaling by the Makah would set on the lower north American continent is a dire threat to recovering whale stocks throughout the hemisphere.” Yeah, these guys must be using some of that new math. It is ridiculous to say that the Makahs taking a couple of whales a year will 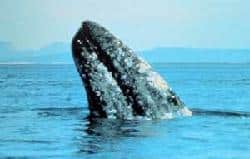 somehow destroy the whole population in this hemisphere. “The problem is that in the course of landing one whale, three others, at least, are killed or injured during similar aboriginal hunts.” I wonder if these people even think before they talk. I don’t seem to recall anything about at least three whales being injured or killed the last time the Makahs caught a whale. In fact I don’t recall any other whales being injured or killed except for the one they chopped up and ate. “It will come as no surprise to learn that Japanese whaling interest representatives have visited Neah Bay, promising to buy any whale meant the Makah can catch. The Japanese say they’ll pay anywhere from $50 to $200 a kilo. Depending on the supply.” That’s absurd because first of all the Makahs aren’t doing this for commercial purposes and second of all, it’s illegal. Not just by the international community but those Makahs have voluntarily outlawed it as well. “I have information suggesting the Makah also have plans to capture Orcas to sell to aquariums. And again U.S. fisheries officers insist there is nothing they can do when it comes to Indians.” That’s one of the stupidest things I’ve ever heard because the Makahs only have a permit to hunt gray whales. Another reason that Sea Shepherd opposes the Makahs is because their permit to hunt whales was given to them by the U.S. and not the I.W.C. which sets international rules for whaling. They contend that their treaty was between the Makah and the U.S. and not between them and the I.W.C. and that the whales belong to the international community and are not the property of the U.S. to be given away. But since the Makahs are their own sovereign nation and are not a singed member of the I.W.C they are not subject to their rulings on whaling.

Conclusion. Whenever Indians had something we wanted or did something we didn’t like we tried to impose our values on them. The Federal government even tried to stamp out their potlatch tradition because they thought it was backward and impoverishing. Too often society has demonstrated this kind of cultural arrogance. I doubt they don’t take well to Sea Shepherd or P.A.W.S. telling them they should raise to a “higher” level of culture by not whaling. Whether or not you like what they are doing or not you should respect their culture and their traditions. The Makahs are just trying to keep their culture alive.