On June 12, 1994, two people were brutally killed. Those two people were Nicole Brown Simpson and Ronald Goldman. Nicole was O.J. Simpson’s ex-wife. O.J. was arrested the next day and charged with double homicide.

O.J. pled innocent to murder charges against him and went to trial in criminal court. The trial lasted a year, and caused worldwide 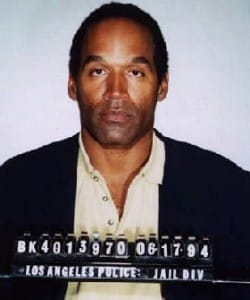 There was so much evidence against him, it seemed almost impossible for him to be that he’d be found innocent. For example, the famous bloody glove found behind the guest house was proven by DNA testing to have O.J.’s blood and hair, Nicole’s blood and hair, and Ron’s blood and hair. DNA testing is 99.9 percent accurate. Fibers were also found on the glove that came from O.J.’s shirt and his Bronco(Trudau, 122).

On June 30th, Allen Wattenberg, a knife store owner, testified during the preliminary hearing that O.J. bought a 14-inch Stiletto knife from his store. On June 12, O.J.’s limo driver arrived to drive O.J. to the airport and saw a black man, with the same build as O.J. sprinting across the lawn towards O.J.’s house. Yet when O.J. answered the door, he said he’d been napping(Biema, 56).

O.J. also acted guilty: he wrote a suicide note, and led police on a chase through L.A. that ended at his Brentwood mansion with his surrender and arrest.

Despite all this evidence, the jury found O.J. not guilty. By all accounts, the prosecution did a poor job presenting the evidence. O.J.’s defense, called “The Dream Team,” took advantage of the prosecutions incompetence and created reasonable doubt in the jurors’ minds (Posner, 62).

O.J.’s time in court is not over yet, however, he is now fighting 2 civil cases, one for the custody of his children, and the other against the Browns and the Goldmans for “wrongful death.” The same evidence that was used in the criminal case is being presented much more effectively in the civil case, and it’s expected the he will be found guilty. The “court of popular opinion” has already found O.J. guilty, and his days as a celebrity and corporate pitch man are over forever (Posner, 64). And if he is found guilty in his civil trials, shouldn’t that logically mean that he is guilty of the murders, even though he was found “not guilty” on legal technicalities and incompetence.