Reconstruction of Early America (The South)

This paper will describe the events that occurred following the Civil War in a period known as Reconstruction.  In the South, during this period of time many people suffered from the great amount of property damage done to such things as farms, factories, railroads and several other things that citizens depended on to keep their economy strong.  Some of these economic hardships included destruction of the credit system and worthless Confederate money.  Though statistics in the South were vague the historian E.B. Long, a careful student of war strengths suggests “perhaps 750,000 individuals would be reasonably a close” as an estimate of Southern enrollments in the armies and navy.

In the South Reconstruction meant rebuilding the economy, establishing new state and local governments and establishing a new social structure between whites and blacks.  During the war Lincoln had expanded his presidency.  With his power he hoped to set up loyal governments in the Southern states that were under Union control.  Lincoln appointed new temporary governors and instructed each to call a convention to create a new state government as soon as a group of the state’s citizen totaling 10 percent of the voters in the 1860 presidential 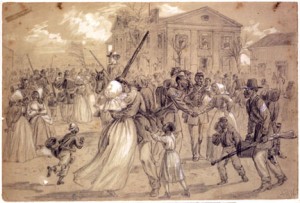 election had signed oaths of loyalty to the Union.  Under this plan new governments were formed in Louisiana, Tennessee and Arkansas but the Congress refused to recognize them.  Republicans in Congress did not want a quick restoration, for the reason that it would bring Democratic representatives and senators to Washington, and in 1864 Congress passed the Wade-Davis Reconstruction Bill.  This bill would have delayed the process of rejoining the Union until 50 percent of the people took an oath of loyalty but Lincoln pocket vetoed the bill.  Abraham Lincoln was assassinated just as the South surrendered in April 1865, and then Andrew Johnson inherited the problem of Reconstruction.  Johnson supported Lincoln’s plan after taking office.

Enough Confederates signed these oaths to enable the immediate creation of new governments.  Johnson required that the new states ratify the 13th Amendment freeing the slaves, abolish slavery in their own constitutions, discard debts incurred while in rebellion, and declare secession null and void.  By the end of 1865 all of the secessionist states but Texas had rejoined the Union.  Radical Republicans in Congress thought they should control Reconstruction and wished to punish the South for causing the Civil War.  Some of these Republicans wished to create a Southern society where blacks and whites were equal.  These Republicans opposed the Southern “Black Codes.”  Black Codes were harsh local and state laws passed to control blacks in the South after the Civil War.

The Radical Republicans reconstruction plan included the passage of the 13th Amendment and established the Freedman’s Bureau(Jackson made the 13th Amendment part of his plan).  The Freedman’s Bureau is an agency of the Federal government set up in 1865 to help former slaves and other persons suffering from the effects of the Civil War.  This reconstruction plan also included passage of a Civil Rights bill and the 14th Amendment(all of these were opposed by Johnson).  The 13th Amendment said: “Neither slavery nor forced labor shall exist within the United States or its possessions except as a punishment for one convicted of a crime.  Congress may make laws to enforce this article.”  The 14th Amendment said in section four:  “The Federal Government shall pay all its debts, including debts contracted in putting down rebellion.  But neither federal nor state governments may pay debts contracted by aiding a rebellion against the United States, nor pay anyone for the loss

of slaves.”  Only Tennessee ratified the 14th amendment and was allowed to rejoin the Union by Radicals.  The remaining ten Confederate states were occupied by United States troops.  Southern states had to write a new constitution guaranteeing political rights to blacks.  The 15th Amendment said: “Neither federal nor state governments can deny any citizen the right to vote because of his race or color, or because he was once in bondage.  Congress can pass laws for carrying out this article.”  Passage of this amendment was mandatory for the last four states to re-enter.

READ:
Essay: The Slave Trade and its Effects on Early America

In the South during the Reconstruction period the new state government were dominated by scalawags, who were Southern whites who supported Reconstruction and who used political power chiefly for political gain, and carpetbaggers who were Northerners who went to the South after the Civil War and entered politics there often for personal gain.  Blacks took part in the new governments(generally voting Republican- a goal of some radicals).  Though some reforms were carried out, Reconstruction governments were plagued by corruption(this was a national problem of the Great Administration).

At the end of the Reconstruction period Southern Democrats(including many ex-Confederates) were gradually winning home rule.  Whites regained total control by 1877 when troops were removed.  Restrictions were put on blacks political rights and eventually laws were passed that discriminated against blacks, these were called “Jim Crow Laws”.  The Ku Klux Klan founded in 1866 to keep blacks from voting, had been controlled by the army, but now was free of that control(though it actually reached its peak of power in the 1920’s).