Robert Alexander Schumann was born in the small riverside town of Zwickau, Saxony, in 1810.The youngest of five children, Robert Schumann was brought up in comfortable, middle-class respectability. As a child, he apparently exhibited no remarkable abilities. At the age of six, Robert was sent to the local preparatory school, run by Archdeacon Dohner. He had in fact already begun his education, with the young tutor who gave lessons in exchange for board and lodging at the Schumann home.

At the age of seven Robert received his first piano lessons, from Johann Gottfried Kuntzsch, organist at St. Mary’s Church, and schoolmaster at 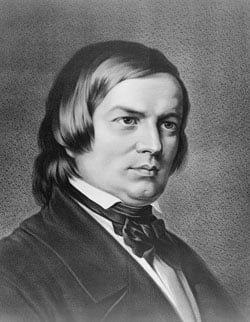 the Zwickau Lyceum. Kuntzsch was a kindly, conservative musician of limited abilities; his knowledge stemmed from leisure-time study. Nevertheless, Robert was soon improvising, and even composing a set of dances for the piano. Robert’s musical talent was recognized by his father. He bought an expensive Streicher grand piano for his son, and soon four-handed arrangements of the classics were heard in the Schumann home. With a friend named Friedrich Piltzing, another pupil of Kuntzch’s, Robert started to explore Haydn, Mozart and Beethoven. As a child, Schumann took part in several concerts at the Zwickau Lyceum. He once played Moscheles’ Alexander March variations, which demanded considerable dexterity. At the public Lyceum Robert was active as both pianist and public speaker. When he was fourteen, Kuntzsch decided that his pupil had progressed beyond the point where he could give further help, and declined to teach him anymore.

Shortly before leaving the Lyceum, Schumann collaborated with his brother Karl in preparing a new edition of Forcellini’s Latin dictionary, Lexicon Totius Latinatinis. Although now very busy as a composer, Robert yearned for affection. He soon fell for seventeen-year-old Ernestine von Fricken, who came to Leipzig in April 1834 to live in at the Wiecks’, and to study with Clara’s father. She had grown up in the little town of Asch with her father, Baron von Fricken, and was the illegitimate daughter of Countess Zedtwitz. At the beginning of September 1835 Robert and Ernestine were secretly engaged. Within days, Baron von Fricken heard that something was afoot, arrived in Leipzig, and took Ernestine back to Asch. After secret discussions, the engagement was broken off by mutual agreement. Possibly Robert had been kept in the dark about Ernestine’s origins. In any event, the affair had a catalytic effect on Robert’s music. He had the idea of writing a series of piano pieces based on the letters ASCH; these he later turned into Carnival. He also composed some piano variations on a theme provided by Baron von Fricken. But Robert’s friend Schunke had fallen seriously ill. Unable to bear the sight, Robert went back to Zwickau again, only returning to Leipzig in December to negotiate a change of publisher for the Zeitschrift. From the beginning of 1835 the journal was published by the Leipzig firm of JA Barth. Late in 1835 Mendelsson arrived in Leipzig to take over as music director of the Gewandhaus. Still only twenty-six, Mendelsson was the director of the age, and Schumann felt an immediate attraction when they met at Wieck’s house. Following the newcomer’s debut in Leipzig, Schumann wrote praising him in the “Letters of an Enthusiast” column of his Zeitzcrift. Schumann did however venture to criticise Mendelssohn’s use of the baton; he believed that an orchestra should function as a “republic” and that ridgity should be avoided. At about this time, too, Robert met both Chopin and Ignaz Moscheles at the Wieck’s. Throughout the autumn of 1835 Schumann was a regular visitor at the Wieck’s home, seeing much of Clara, who was now sixteen. He had been following her career as a virtuoso closely since she was nine.when he was depressed, she cheered him up. Their talent affection was now becoming increasingly evident. Robert had now finished his first piano sonata, dedicated “The evening Clara set out on an important concert tour, Robert came to wish her well, and kissed her good-bye.

They saw each other again in Zwickau, and kissed again. In the new year Robert traveled to Dresden, where he knew Clara was spending a 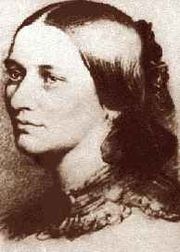 holiday without her father, and made his declaration of love. Schumann seems to have thought Clara’s father would welcome him as his son-in-law. He was wrong. Hearing that Robert and Clara had been meeting behind his back, Wieck was enraged, and wrote to Robert insisting that all relations be severed. At the same time he distracted Clara’s attention by flaunting her a new singing teacher, Karl Banck. Clara, only just sixteen, was regarded by her father as a mere child. Wieck had nurtured her talents, and now saw her on the threshold of an outstanding career. He was not going to stand by and watch her marry Schumann, who he knew, to his own irritation, had neglected his training and squandered his resources. Naturally Robert was desperate. Extravagant spending sprees led to pleas to his brothers for money. He started drinking heavily, and his generally impolite habits led to a noisy argument with his landlady. Finally he wrote to her. To understand Wieck’s attitude, we need to examine his feelings about Clara. She represented his special creation, his life’s work. He had labored with her for long years at the keyboard. She had finally emerged as his best pupil, the star exemplar of his techniques. At the same time she now represented a valuable commercial asset. She simultaneously fed Wieck’s wallet and his ego. In May 1837, after another long tour, Clara arrived back in Leipzig. Not long afterwards banck, like Schumann before him, was rejected by Wieck as a suitor for Clara. At this time Schumann’s disappointment seems to have turned to malice. He declared himself ready to avenge himself on Clara. But this was only a temporary mood; in a letter to her in August, with words “cold and serious, yet so beautiful”, Robert protested she remained “the dearest in the world”. His feelings were echoed by his beloved.

On August 14 they became sacredly engaged. On Clara’s eighteenth birth day, Robert Wrote to Wieck asking for his consent to their marriage. He argued that his prospects were greatly improved, and his stability enchanced; “You owe it to my position, my talent and my character”. The wedding finally took place on 12 September, the day before Clara’s twenty-first birthday. After that she would in any case free of her father’s will. Possibly Robert chose the day as a final signal of defiance to his new father-in-law. Very later in their marriage Robert started to have a mental illness. He heard a solitary note beating in Robert’s ears, giving him no peace. On 26 February 1854 Robert begged Clara to have him committed to an asylum, but was finally persuaded by the doctor to go to bed. Later Clara discovered that Robert had thrown himself into the River Rhine, and fisherman had rescued him. On March 4 Robert was taken to Dr. Richarz’s private asylum at Endenich, near Bonn. At intervals his mind cleared a little. On June 8 1856, Robert’s birthday, Brahams found him thin, oblivious of everything outside, picking names out of an atlas and putting them into alphabetical order. On Thursday 29 July Robert was finally released from his suffering. At four in the afternoon he fell asleep. He passed away without anyone noticing. Clara did not see him until half an hour later. Schumann was buried at seven o’clock on the morning of 31 July 1856 in Bonn. Brahms and Joachin walked in front of the coffin which was carried by some of the Dusseldorf choir. Clara asked that a few friends be there. That was the life and death of Robert Schumann.