A recurring theme in Sir Thomas Malory’s Morte d’ Arthur is the use of imaginative descriptions of characters and settings. Imagination is what the reader of the story must use to form his or her own mental images of a situation, and the better the storyteller is, the clearer the mental image. His descriptions, ranging from horrific to chivalrous, always manage to draw the reader into the story and make him or her an active participant, usually knowing a bit more than the characters about their own fates.

Malory employs many literary techniques, but perhaps his most prominent is his use of imagination. When the exerpt begins, King Arthur is 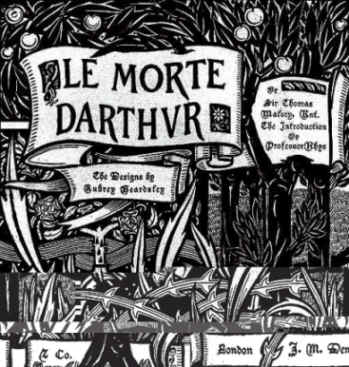 having a nightmare involving falling into a pit of serpents. Malory describes the scene in Arthur’s head as if the reader were there with him. What separates the reader from the character is the fact that the reader knows it’s only a dream, and Arthur doesn’t.

This is an interesting way of keeping the reader a safe distance from the goings on of the story. Malory uses this method again, when Arthur and his army are about to negotiate with Mordred and his. One of the King’s soldiers notices a snake about to bite him, and he draws his sword to slay it. All that Mordred’s men see is the blade being drawn, and a battle immediately ensues. Once again, the reader is told more than the characters. The only thing keeping the reader a part of the story is the vivid descriptions given of the nightmarish world of Arthur’s dream, and the smoking, bloody battlefield of a war that wasn’t meant to happen.     Malory also makes use of drama in his portrayal of the double-death scene, again with Arthur and Mordred. When he describes Mordred’s sword being driven into Arthur’s chest, and Arthur’s spear running Mordred through, the reader almost cringes at the thought. However, it is not enough that they are both killed by each other’s hand, Arthur doesn’t die immediately. He is carried by his most faithful knights back to a chapel, where he died more honorably.

The reader is bearing with him all the way, glad to be rid of the villain Mordred, but at the same time pitying him, for he was Arthur’s son. This makes the story even more involving, and forces the reader to imagine Arthur lying on the dirty floor, blood streaming from a thousand wounds, dying for the honor of his fallen comrades. The reader is crushed by the death of a character they have come to root for and respect, thereby making the story hold all the more meaning for them.  A good writer will be able to bring the reader into the story and make them a part of it. In a way, Sir Thomas Malory uses the reader’s own imagination to tell the story, which is the most effective method of all.