For many centuries, spices and herbs have played an important role in many aspects of everyday life including cooking or medicinal purposes. Currently it is used as an alternative to treat different ailments and bacterial infections. Medicinal properties of spices and herbs may vary considerably depending on their molecular structure.

Zingiber officinale (ginger) is a spice that is antiemetic, anti-rheumatic it is also used to treat colds.  Cinnamomum zeylanicum (cinnamon) is 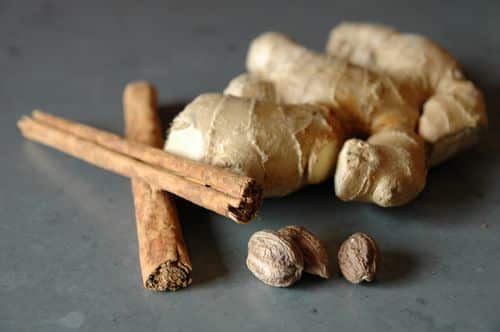 an antiseptic spice that can be used to treat diahrea. Escherichia coli are an enteric rod shaped bacteria that aids in digestion. Certain strains of E.coli may cause intestinal problems such as diarrhea and kidney problems. Micrococcus luteus is a spherical shaped bacteria that arthritis, meningitis, pneumonia, skin infections, and even death.

For many centuries, herbs and spices have played an important role in many aspects of everyday life including cooking and medicine. According to both Fei et al. (2011) as well as Arora and Kaur (1999), spices have been demonstrated to have antimicrobial effects on various types of microbes; however, not much is known about their antimicrobial activity and how it compares to synthetic antimicrobials. It is also possible that using combinations of spices can lead to an increase in antimicrobial activity as well as a decrease in the chance that microbes will easily transfer resistance (López et al. 2007; Fei et al. 2011).  These antimicrobial effects can vary depending on the molecular structure of the spice and the physiology of the microbe (Arora and Kaur 1999; Fei et al. 2011).

Cinnamomum zeylanicum (cinnamon) is a spice that is used in cooking and baking, but it also has microbial properties in that it can be used to treat intestinal problems such as diarrhea.  A microbe it works against is Escherichia coli, an enteric Gram-negative bacillus that is known to cause diarrhea and also kidney problems. According to López et al. (2007), the key chemical in cinnamon, cinnamaldehyde, is a very strong antimicrobial agent and was the most effective out of all the spices and herbs they tested on various microbes including E. coli.  Zingiber officinale (ginger) is an antiemetic and anti-rheumatic spice that is also often used to treat colds. An example of a microbe it works against is Micrococcus luteus, which is a Gram-positive coccus that plays a role in the onset of arthritis, meningitis, pneumonia, and skin infections.