The Gospel of Thomas

The Gospel of Thomas was discovered in 1945 near Nag Hammadi, Egypt by a peasant named Muhammad Ali and his brothers who were looking for fertilizer to use on their crops.  Ali’s brother dug up a clay pot, but they were all afraid to open it because they thought an evil spirit would come out of it.  They eventually opened it and found old papyrus documents inside, which they sold to an antique dealer.  Over time, the documents were collected and brought to the Coptic Museum in Old Cairo.  The papyrus documents found in the clay pot were written in Coptic around the 4th century C.E., but it is known that the original was written in Greek because the Oxyrhynchus papyri—manuscripts found earlier in Oxyrhynchus, Egypt—had fragments of the Gospel of Thomas written in Greek around the 3rd century C.E. (Grant, pg. 18, 67).  There are some discrepancies between the Greek and Coptic versions with regard to length and placement of sayings, which probably occurred as the Greek was being translated into Coptic (author, pg). 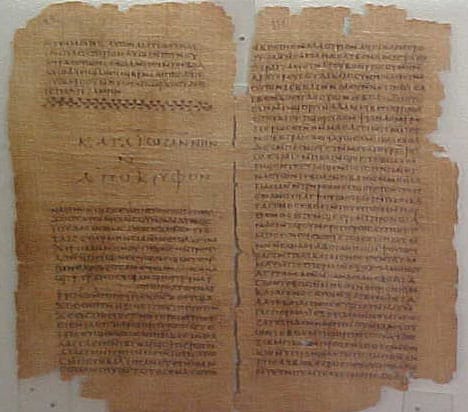 was written by a person named Judas Thomas (Didymus) most likely around 120 C.E. in Syria (DeConick, pg. 240).  However, “Thomas” was not used as a proper name during this time.  According to one author, Jesus would give nicknames to his disciples and “Thomas” (Aramaic) or “Didymus,” (Greek) which translates to “twin,” was a nickname Jesus gave to one of his disciples (Uro, pg. 10).  Both the Acts of Thomas and the Book of Thomas the Athlete also refer to Judas Thomas as the twin of Jesus (Grant, pg. 67).  However, many scholars have different views on why “Thomas” is used.  For example, Pagels takes a different approach to understanding the reason why the author refers to himself as Jesus’ twin from that mentioned above.  Referring to a passage in the Gospel of Thomas where Jesus says “whoever drinks from my mouth will become as I am, and I myself will become that person…” (quote within a quote..pg. 57) Pagels says “by encountering the ‘living Jesus’…one may come to recognize oneself and Jesus as, so to speak, identical twins” (pg. 57).  She says that “Thomas” is not just a nickname that Jesus gave to his disciple, Judas received the name “Thomas” because he had seen Jesus, so he became “one” with Jesus—a figurative twin.

The Gospel of Thomas is a part of a category of Gospels known as the Gnostic Gospels because they were based on Gnostic beliefs.  Gnosticism arose in Syria in the late first century and eventually spread throughout Greco-Roman society (Grant, pg. 63).  “Gnostic” comes from the Greek “gnosis” which translates to English as “knowledge” (Ehrman, pg. 306).  The accepted belief among Gnostics was that there is a saviour in heaven who gives the secret knowledge necessary for salvation only to those who are worthy (Grant, pg. 64).  Some believed that this saviour was Simon Mangus, the first Gnostic, while others believed that it was Jesus (Grant, pg. 65).  Those who believed Jesus was the saviour assumed that most of Jesus’ disciples misunderstood him and his teachings and only a few were given the knowledge for salvation from Jesus, which they passed on to other Gnostics (Grant, pg. 65).  The opening line of the Gospel of Thomas provides evidence that it is a part of the Gnostic Gospels: “And He said: he who will find the interpretation of these words will not taste death” (Grant, pg. 66 (citation within a text)).  This phrase suggests that there is some knowledge that is necessary to obtain eternal life.

There are several reasons why the Gospel of Thomas was not chosen to be a part of the canon.  First, it contains no account of Jesus’ birth, death, resurrection, or even his life in between.  The author doesn’t portray Jesus in the same way as the authors of the canonical Gospels do.  We don’t know anything about Jesus’ life, the miracles he performed, and the opposition he faced (Grant, pg. 106-107).  Second, no historical context is given.  The author gives no description of what life was like at the time (Grant, pg. 113).  Third, no reference is made to any passage in the Old Testament (Grant, pg. 113).  The authors of the canonical Gospels all refer to prophecies made in the Old Testament that were fulfilled by Jesus, which makes Jesus more credible.  Finally, there is no reference made to a future kingdom in heaven (Grant, pg. 113).  According to the author of the Gospel of Thomas, the kingdom is present in each person and salvation is achieved not through Jesus’ dying on the cross, but through the secret knowledge one obtains (Grant, pg. 113).  To summarize, Meyer states, “Jesus in the Gospel of Thomas performs no physical miracles, reveals no fulfillment of prophecy, announces no apocalyptic kingdom about to disrupt the world order, and dies for no one’s sins” (pg. 61-62).  Simply put, the Gospel of Thomas is just not consistent enough with the Gospels already accepted into the canon for it to also be a part of the canon.  It doesn’t give enough information about Jesus for the reader to believe that he truly was divine.

I had not previously known anything about the Gospel of Thomas before researching it for this paper besides the fact that it was not included in the canon.  I was not expecting it to be just a collection of sayings of Jesus that someone wrote down.  Before reading it, I could understand right away why it was not included in the canon—there was no substance, just sayings.  However, It was interesting to read it and note some similarities between it and the canonical Gospels such as parables and commands, which made me then wonder why it was not included in the canon.  Upon further research, I learned more about Gnosticism and also the lack of information included about Jesus’ life and death in the Gospel of Thomas to provide evidence that he actually was the divine Son of God.  It was also intriguing to read the story of how the Gospel of Thomas was discovered: a couple of boys were looking for some fertilizer and happened to dig up a clay pot with the papyrus documents inside.  This makes me wonder about how many other important documents could still be hidden in clay pots and whether any of these, if discovered, will have an impact on what is already found in the Bible and Christianity as a belief.

It was interesting to read about the Gospel of Thomas and many scholars’ views on its underlying belief system, why it was not included on the canon, and their opinions on whether or not it should have been included in the canon.  From my research, I learned a lot about Gnosticism and their very different view of Jesus compared to the views presented in the canonical Gospels.  This provides evidence that, even in the early church, Christianity was not straightforward as one would think since it hadn’t been very long since Jesus was there.  Comparable to today, there were many belief systems around at the time—not everyone believed the same thing about Jesus and his mission on earth.  I also learned that Gnostics also have a very different view of salvation from Christians: Gnostics believe that anyone can attain salvation if they are given the knowledge to do so, whereas Christians believe that only those chosen by God are saved—it is not something that one works towards achieving.

Another interesting fact I learned was that “Thomas,” meaning “twin,” was not actually used as a proper name during the time Jesus was on earth.  Instead, it was one of many nicknames Jesus gave to one of his disciples.  It is also interesting how many people can misinterpret Jesus calling one of his disciples “twin” to mean that that disciple actually was physically Jesus’ twin.

As a student studying the New Testament, I believe it is important to also study works that were not included in the canon as they may help to provide historical or cultural context for events that occurred in the canonical stories.  This, ultimately, allows us to gain more insight on what life was like for people living at that time and to understand the stories more fully.

As a Christian, I believe it is important to be well-grounded in the canonical books of the New Testament, but it is also important to understand the noncanonical works and why they were not included in the canon.  It may be that one of the noncanonical works provides more background information of a story also included in one of the canonical works that helps one understand that story better and how it helped Christianity grow as a belief.  Reading noncanonical books as a Christian may, ultimately, work to strengthen one’s faith as a whole as, sometimes, it is not until one’s faith is challenged that one truly believes.