Insomnia is a chronic sleeping disorder in which it is very difficult to start and continue sleeping.  One of the other symptoms of 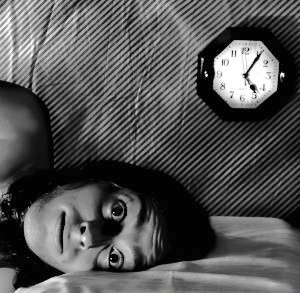 insomnia that is most recognized is waking up repeatedly in the middle of the night.  Lack of sleep leads to two other things, daytime fatigue and restlessness.  These are bad on the job and at school while doing tests or other important work. The amount of sleep that each person needs to feel alert during the day varies.  If you have a night of sleep which is much less than the amount of sleep you need, then you will more than likely feel quite sleepy the next day.   Thirty-three percent of adults in America have a case of insomnia at least once in their life.  Most cases only last one or two nights, but insomnia can continue for weeks  or possibly even months.

There have only been three standard types of insomnia that have been identified by doctors.  They are as follows:

Transient insomnia is considered a few sleepless nights that is usually brought on by stress, excitement, or environmental changes.  A person could have trouble sleeping the evening before a big meeting or shortly after a breakup or a fight with his girlfriend.

Short-term insomnia is usually two or three weeks of poor sleep caused by continual stress at work or at home, as well as medical and psychiatric illnesses.  Eliminating the source of the stress usually takes care of the irregular sleep patterns

If difficulty sleeping was the only problem with insomnia, then it wouldn’t be so bad.  Some of the other problems it can cause are anxiety in noticeably impaired concentration and memory.  To keep episodes of insomnia at a minimum, sleep specialists recumbent practicing good sleep hygiene. There is another sleeping disorder called Sleep Apnea.  Sleep Apnea is not really problems with going to sleep; it is more dealing with problems while you are sleeping.  Some of the symptoms of sleep apnea include:

Sleep apnea is more common in middle-aged men and overweight people.  People with sleep apnea often complain of insomnia or 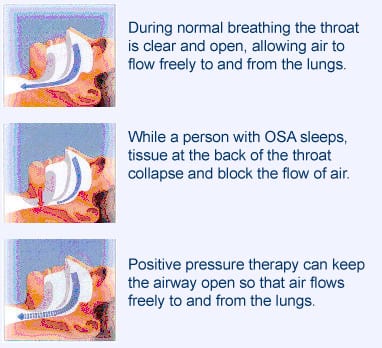 excessive daytime sleepiness.  Waking up with headaches is another symptom of sleep apnea. So is impaired memory and concentration.  Problems  arising from sleep apnea can include heart and lung disease, and can also cause heart failure in severe cases.

There are three typical forms of sleep apnea, with varying degrees of respiratory movements.

Obstructive Apnea is the most common and severe form.  It is associated with an upper airway obstruction and a loss of airflow even though the respiratory muscles are active.  When muscles of the soft palate at the base of the tongue and uvula relax and sag, the block the airway and cause loud, labored breathing.  When breathing stops, pressure builds up until the sleeper lets out a gasp for air. Each gasp causes a mini-awakening. People with obstructive apnea can stop breathing for 10 seconds or more, several hundred times a night. Snoring is present.

Central Apnea is when the airway remains open but the diaphragm and chest muscles stop working. As oxygen levels in the blood stream decrease, the sleeper will awaken and resume breathing. Several awakenings during the course of a night usually occur, sometimes accompanied by gasps or choking sounds. Complaints of insomnia and an inability to maintain sleep are common. Snoring will not necessarily be present.

Mixed apnea occurs when the sleeper experiences a brief period of central apnea normally followed by a longer period of obstructive apnea. For this reason people with mixed apnea often snore. Mixed apnea is common among people with sleep apnea.

Treatment for sleep apnea varies depending on the type of apnea and the individual patient needs.  Sleep apnea syndrome caused by the soft tissue of the throat collapsing during sleep is often treated with a device known as CPAP (Continuous Positive Airway Pressure).  The compressor creates air pressure that is sent through the airway of the sleep apnea patient, keeping it open to allow the patient to sleep and breathe normally.

Parasomnias are a type of sleep disorder that can intrude into or interrupt the sleep process.  There are disorders of arousal, 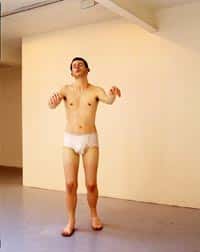 partial arousal and sleep-stage transition.  The following are common examples of parasomnias.

Episodes of sleepwalking can range from a person sitting up in bed to more complex activities like preparing a meal. Although the sleepwalker may be unaware of their environment, they often show an ability to navigate through their house or wherever they may be without serious harm. However, there is a danger of the sleeper falling or walking outside. Trying to stop a sleepwalker is often met with resistance. Sleepwalkers can experience emotional distress and embarrassment because of their nighttime activities, keeping them from staying with friends or vacationing. Sleepwalking is most common in children and normally disappears with the coming of puberty.

While sleeping, a person may begin talking without reason. The sleeper may say a comprehensible speech, single words or other sounds. Typically, the sleep talker is not aware of what they are saying. The talking is often said without emotion, but can be associated with stressful shouting. Other than the irritation or distress it may cause loved ones, sleep talking is harmless. It is often a temporary phenomenon brought on by stress or illness, but it can continue for many years. Sleep talking frequently occurs with other sleep disorders, such as obstructive sleep apnea and sleep terrors.

The causes of sleep-related eating are many. Most of them arise from a background of more conventional sleepwalking. In some cases, the sleep-related eating was brought on by medications prescribed for depression or insomnia. It may be a display of other sleep disorders, such as obstructive sleep apnea or periodic limb movements.

The “sleep-related eating disorder” has only recently been described. Common concerns about this disorder are excessive weight gain, choking while eating, potential injury from starting fires while cooking or cutting oneself while preparing food, and sleep disruption. Approximately two-thirds of those afflicted with this disorder are women and the symptoms typically begin in the late 20s. The overwhelming majority do not suffer from a waking eating disorder.