What is Suburban Sprawl?

Suburban sprawl is resulting in the increased consumption of fossils fuels in order for individuals to commute to and from their homes and work. This increased demand of fossil fuels will further deplete our already declining oil reserves, resulting in a cost increase. This will make living conditions for humans much more difficult and potentially unbearable if oil is no longer a commodity which can be readily afforded by the working class. Our ability to drive to grocery stores, the doctor and other essential services will be severely hindered and all petroleum- derived products will become non-existence. Suburban sprawl has the potential to drastic alter the lifestyle of the human species in a drastically negative mannerism. 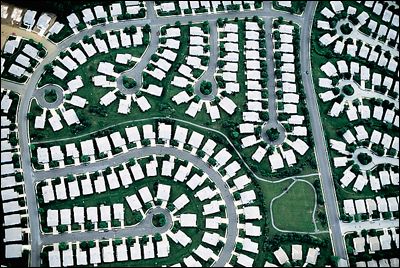 certain areas. The removal of trees will remove habitats for animals which often play integral parts in the niches of life and the food chain; potentially resulting in certain pests or insects becoming too abundant in an area. Also the removal of trees stops them from playing a critical role in photosynthesis and the recycling of carbon dioxide into oxygen which is necessary for the survival of all fauna on this planet. The removal of lakes, will destroy aquatic ecosystems and prevent the large bodies of water from moderating extremely warm or cool temperatures; potentially resulting in climate change which further deviates the area from its original living conditions.

Suburban sprawl results in the remodeling and landscaping of many natural and scenic areas. Forest, lakes, valleys are all casualties when housing companies begin constructing large, identical and often mundane suburban homes. The natural beauty already present is replaced with concrete roads, homes, and often very little flora apart from lawns, potted plants and adjacent pre-planned trees. Suburban sprawl inevitability results in the destruction of nature and its beauty.

Suburban sprawl will result in the removal of natural habitats and displacement of animals from their homes. By moving animal species out of their habitats it will compromise their ability to survive and potentially render them unable to exist at the level they did prior to the displacement. This can cause the extinction of the species which is morally unjust because they have the same right to exist as the human species. It is reprehensible that our actions could result in the extinction of fellow organisms which are entitled to co-exist on this planet with us.