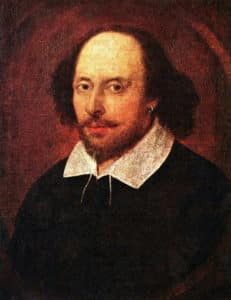 When W.Shakespeare was four years of age, he went to a private school for both boys and girls. He was educated in Latin and Greek. His school days often started from dawn till dusk.

W. Shakespeare wrote many plays some of them are; A Midsummer Night’s Dream, Hamlet, Macbeth, and one that is well-known Romeo and Juliet. In every single one of his plays, only men performed and sometimes he would also be in it. Most citizens would think that W. Shakespeare was homosexual. He referred to his stage ceiling as “The Heavens”. Altogether, W. Shakespeare wrote 37 plays and 154 sonnets and most of them were written in modern English.

At the age of eighteen, W. Shakespeare married a twenty-six year old woman, Anne. She was the daughter was a respected yeomen farmer. The couples had their first daughter, Susanna in May 1583, followed by their twins, Hamlet and Judith in January 1585.

William Shakespeare had many accomplishments as an English author. People believed and still believe to this date that his first play was Henry VI. They also believed that his first poem was Venus and Adonis. In March 15, 1595, Shakespeare attained a Royal Record, given to servants to the Lord Chamberlain.

This is too good. Easy to write and easy to learn..!