Abigail Adams was a unique women because she had an education and an interest in politics.  She learned how to read and write and 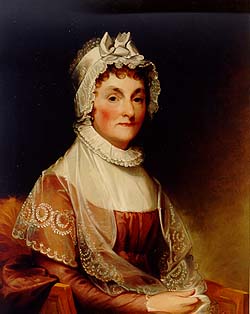 enjoyed poems most.  She was also very resourceful by helping her husband on difficult problems.Abigail was born on November 11 on the Julian calendar, or November 22 on the modern Gregorian calendar.  Abigail had two sisters named Mary and Elizabeth or Betsy.  She had one brother named Williamor Billy.  Abigail’s name was originally Abigail Smith.  Each baby was baptized on the first Sabbath of its life and was recorded in their parish records.  Abigail live in a comfortable house.  When Abigail was sixteen, her father added a wing that was bigger than the original building to make room for the children, servants, and visitors. When I say servants it means that they were probably slaves but were called servants to avoid the dehumanizing effect that the word ‘slave’ can mean.  Their house was a sight of luxury in the eyes of the common folk in the parish.  Though they lived well, the Smiths had no fortune.  Abigail’s father often worked with his own hands, planting corn and potatoes, gathering hay, sowing barley, or making sure that his sheep received proper care.  Abigail, with the help of her family grew a very religious bond between each other and a long lasting friendship.Abigail never went to a real school because of poor health.  So,she learned at home. Her father’s library was not big, but she still went to it to read books.  Abigail’s favorite books were novels by Samuel Richardson.  Abigail’s father knew John Adams by working with him and she grew rather close to him starting a wedding.  This now made her name Abigail Adams.  Their wedding was held on October 25,1764, a month before her twentieth birthday.  John was a lawyer and very often was not at home due to court cases he had to attend to.When Abigail was pregnant with her first son, John was only at home for eight out of the nine months.  The baby was born on a hot day on the morning of July 14, 1765.  The baby’s name was ‘Abigail’, but was called Nabby.  She was with her parents when she had the baby.

Shortly after, she was again pregnant.  July 11, 1767, she delivered a healthy boy named John Quincy.  John Adams soon moved his family to Boston to be closer to his important clients and the center of political action.  In Boston, Abigail had two more children.  one named Susanna, who died thirteen months later, and Charles who was born healthy at the end of May 1770.  John Adams sent everyone in has enlarged family back to there old house because of the recent Boston Massacre happening.  While Abigail was there, She had her last son named Thomas.  John soon bought a brick house back in Boston and moved everyone back in.  Abigail started teaching the children to read and write.John told Abigail almost everything that he knew and went to her for political problems.  He understood what she could understand and trusted her.  Abigail became the most informed woman on public affairs in the nation.  On August 10, 1774, Abigail parted with John as he left to attend the Congress called at Philadelphia to try and unite the colonies against Great Britain’s plan to punish Boston and Massachusetts.  Though her sons would not be of military age for another decade, Abigail dreaded war, in which only God knew what would happen.  When the shots at Lexington and Concorde were fired, John was again off to the Congress and cautioned Abigail that she should ‘fly to the woods’ with the children if the British attacked Boston. Abigail prayed for the war and on June 17 John Quincy and Abigail went to Bunker Hill and watched the roar of the cannons and saw the flames of burning Charleston atop of Penn’s Hill near where they lived.  Soon they learned of the British losses and how greater they were, but Abigail knew someone named Dr. Warren who died.  He helped John Quincy From the loss of his finger.  Abigail wrote many letters to her husband and it became a way of life for her.  She was always keeping John up to date with what’s happening at the immediate point in time.Abigail sometimes called herself : Mrs. Delegate’ because she was the wife of a Revolutionary leader.  Abigail continued to keep in tact with her husband throughout the war.  She also was very political. Then later she led a very productive life.