The oldest pig on the farm, Old Major, gathered all the farm animals into the barn. He told them of a dream he had about one day 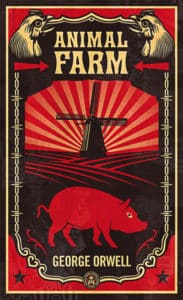 animals ruling the world. He said there was to be a rebellion in the farm against their cruel farmer, Mr. Jones. Old Major did not know when the rebellion was to take place but he knew it would be soon. He taught the barnyard a song called Beasts Of England. This song riled the animals up about the rebellion. Three nights later Old Major died. There were pigs to take his place though. They were Snowball, Napoleon, and Squealer. They called Old Majors teachings “Animalism.” After Old Major died the animals did not think that much of the rebellion as they used to. Two horses did not like the idea. They were Clover and Mollie. The other horse, Boxer, listened to what ever his leader said. The pigs also had trouble with the farmer’s tame raven, Moses. Moses said that the rebellion was not a good idea. One day however, the rebellion did happen. After the animals had the farm secure, they made laws called the Seven Commandments. They were like our ten commandments. Then they renamed the farm from Manor Farm to Animal Farm. The pigs learned to read and write by looking at books in the farmhouse. They also learned many other things. The animals had to work even harder than before. They had to harvest the fields without any tools. The animals were still happy anyway because they were free from the farmers rule. An old donkey named Benjamin was unchanged after the rebellion. They had sort of what was like council meetings. Napoleon and Snowball were most active in the debates. They made committees to teach the animals how to read and write. Napoleon found that two dogs, Jessie and Bluebell, gave birth to six sturdy puppies. He took them away to the barn loft where no one could reach them but him. He was going to teach them himself.

The cows were milked and the pigs took the milk for themselves. They said they needed it for their brains to work properly. They also said this about the ripen apples that fell. The pigs say that they need a certain thing to function many times throughout the novel. By the end of summer, the news about Animal Farm had spread throughout the country. Napoleon sent pigeons out to other farms in the area trying to rile them up to rebel. People around Animal Farm thought it would only last a little while but when they found out their animals were showing signs of rebelling, they came to the decision of attacking the farm. The strike force included twelve men, the former farm hands, and Mr. Jones who had a rifle. As the men approached the animals struck and won. The attack was lead by Snowball. They raised a flag and gave awards to those who deserved it. People were beginning to realize that Animal Farm was a real threat. In the winter Mollie left and went to another farm. Snowball proposed to build a windmill. At the meeting where they would decide about the windmill, the animals seemed to favor Snowball. Then Napoleon stood up and yelled and the puppies he raised charged into the barn after Snowball. Snowball ran off the farm and never came back. Napoleon was declared ruler and whoever opposed him were attacked by the dogs. The animals toiled on and they were surprised to hear that Napoleon wanted a windmill. Squealer explained why Napoleon wanted to build a windmill and they agreed. The construction of the windmill began and there was a huge storm which knocked it down. Napoleon blamed this on Snowball. Then all these animals came forward saying Snowball made them do unthinkable crimes and they were killed. One of the Seven Commandments said that no other animal shall kill another animal. The animals were puzzled. Squealer changed the commandment at night adding “without cause.” Since the animals were not smart enough to remember, they just let it pass.

Napoleon acquired the help of a human, Mr. Whymper, who sold hay, eggs, and other things of the sort. The neighboring farmer bought some wood but used forged bank notes. The humans attacked. This time they all had guns. The windmill was blown apart and there were a lot of casualties. Even though the animals were told they won by their leaders, they new they lost. A couple years later, Boxer was coming of age and was going to retire. He was working and he broke his leg. Napoleon called a “vet” but it was a man from the slaughter house. One of the smart dogs saw what the truck had written on it’s side. Squealer again made an excuse and they believed it. Meanwhile, the pigs were breaking more commandments. They changed the commandment at night when they broke one. They started wearing clothes, sleeping in beds, and drinking alcohol. All of these acts were forbidden in the commandments. One day some farmers from neighboring farms came to Animal farm and had a dinner. They made a toast to Animal Farm and then played poker. The animals outside peered inside to watch. Just then Napoleon and another farmer played the same card and started fighting. Then the animals looked from pig to man and could not tell the difference.

Protagonist: This book had many protagonists. One protagonist was Snowball. He was an honest character who cared about the animals’ best interest.

Antagonist: The antagonist in this book was Napoleon. Napoleon exploited the animals to benefit himself. He changed the laws many times to make his life more comfortable while the other animals had to do hard work.

The author is trying to tell the reader that communism doesn’t work. This was written as an antiwar book according to the introduction. Another clue that the book is about communism is how the pigs called the animals “comrades”. The pigs symbolized revolutionary communist leaders such as Marx, Lenin, and Stalin.