Aquarius can be found in the SE sky in autumn, especially October. A dark night is especially helpful because many faint stars make up Aquarius.  This will help to make the fainter stars stand out because it’s hard enough to see a shape in Aquarius.  Up and to the west of aquarius, pegasus can be found.  Down and to the east of aquarius, capricorn can be found. Aquarius portrays a man or boy spilling water from an urn.  Aquarius is identified with Ganymede, a beautiful young shepherd who was abducted by Zeus and taken to Mount Olympus to be the cup bearer for the gods. 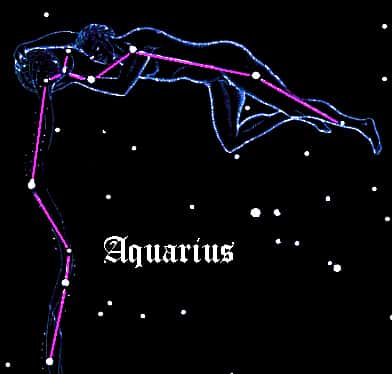 There are three star clusters contained in Aquarius.  M2, which was discovered in 1764, is one that can be seen with a small telescope.  A larger telescope is needed to make out the individual stars.  M72 is another cluster that is located southeast of Albali and isn’t far from the Saturn Nebula.  NGC 7492 is the third cluster and is located east of Skat.

Aquarius also has two nebulae in it.  It is called the Saturn Nebula because it resembles the rings on Saturn.  A very large telescope is needed to see its rings.  It was discovered in 1782 by William Herschel.  In small telescopes it will appear as faint disks of fuzzy light.  It lies southeast of Albali near the cluster M72.  Its central star can be spotted with a large telescope.  The other nebula, NGC 7923 is southwest of Skat and is a well known Helix Nebula.  It is brighter than NGC 7009, the Saturn nebula, but has a fainter central star.