On December 5, 1945, Flight 19, consisting of five avenger torpedo bombers, disappeared without a trace.  The flight plan took them into an area with a name that now sends chills up the spine of many a pilot: the Bermuda Triangle.  Despite extensive searching, no evidence of the planes has ever been found.

The “triangle,” sometimes called the “Devil’s Triangle,” stretches roughly from the coast of Florida, east to the islands of Bermuda, and south to Puerto Rico and Caribbean waters.  Within this area, it is estimated that approximately 100 planes and ships have fallen from the sky or have sunk. 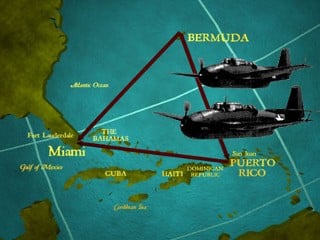 Theories abound.  Is there a “black hole” here, or a special time warp?  Were the pilots abducted by aliens?  Could the mineral content of a fallen meteorite increase the gravitational pull or form a magnetic attraction?

Most scientists believe there are more logical explanations to the disappearances in the Triangle.  For one thing, the area features the turbulent waters of the Gulf Stream.  When mixed with Atlantic storms, these waters are a recipe for disaster.  Waterspouts (twirling columns of water), which are common in this area, can bring down both ships and planes.  The very deep trenches of this region can swallow the remains of a ship or plane, so that no traces are ever found.

Llyods of London, the famous insurance company, has determined that The Bermuda Triangle experiences no more accidents than any other place.  Perhaps exaggeration may be able to explain at least some of the mystery.