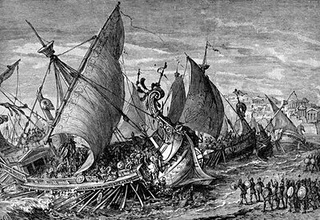 There are many theories surrounding who the Sea Peoples were, Phillstine, Greek, Minoan, Trojan or people from modern day Italy.

In 75 BC, on voyage in Aegean Sea, Julius Caesar was captured by Sicilian pirates. He maintained an attitude of superiority and good cheer throughout his captivity. When the pirates decided to demand a ransom of twenty talents (A certain amount, weight wise) of gold, Caesar is said to have insisted that he was worth at least fifty, and the pirates indeed raised the ransom to fifty talents. After the ransom was paid and Caesar was released, he raised a fleet, pursued and captured the pirates, and had them put to death.

At the age of 16, Saint Patrick was captured and enslaved by Irish pirates for 6 years before escaping and returning to his family.

READ:
Effects of World War I on France

The Vikings eventual downfall was Christianity. As Christianity swept through Scandinavia, many were forced to convert. The Vikings main source of income, slaves, was suddenly outlawed due to Church teachings. Improved defences and lack of economic initiative stopped raids. New cultures swept through Europe and replaced the Viking culture. Organized opposition sealed the Viking’s fate.

By 1615 and 1625, Zaporozhian Cossacks had even managed to raze townships on the outskirts of Istanbul, forcing the Ottoman 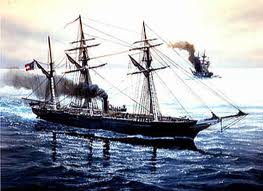 Sultan to flee his palace.

A wartime activity similar to piracy involves disguised warships called commerce raiders or merchant raiders, which attack enemy shipping commerce, approaching by stealth and then opening fire. Commerce raiders operated successfully during the American Revolution. During the American Civil War, the Confederacy sent out several commerce raiders, the most famous of which was the CSS Alabama. During World War I and World War II, Germany also made use of these tactics, both in the Atlantic and Indian Oceans. Since commissioned naval vessels were openly used, these commerce raiders should not be considered even privateers, much less pirates—although the opposing combatants were vocal in denouncing them as such.

READ:
The Role of Women in the Church

Piracy is theft on high the seas, and has been done since the first boats set sail. It was done as far back as the Egyptians and Romans and still occurs in our modern day, on the oceans and on the internet. Piracy was and is still done for two reasons. One: It is lucrative. The rewards are great; the loot/booty/plunder is worth the risk for many. Two: Piracy appeals to a certain dark side in all of us, seen with internet piracy especially. We like to have things for free and if we can get away with it, we will. Piracy is also a sort of “romanticized” crime. With the love of the high seas and the age of sail, piracy will always be a “cool” crime and not one thought to be too bad. In today’s age, both points still remain true.