From the beginning of the 1912 election, the people could sense the new ideas of Woodrow Wilson would move them in the right direction. Wilson’s idea of New Freedom would almost guarantee his presidential victory in 1912. In contrast to Wilson’s New Freedom, Roosevelt’s New Nationalism called for the continued consolidation of trusts and labor unions, paralleled by the growth of powerful regulatory agencies. Roosevelt’s ideas were founded in the Herbert Croly’s novel, The Promise Of American Life written in 1910. Although both Wilson and Roosevelt favored a more active government role in economic and social affairs, Wilson’s favored small enterprise, entrepreneurship, and the free functioning of unregulated and unmonopolized markets. Obviously, from the results of the 1912 election, the people favored Wilson’s New Freedom.

Wilson entered office with a clearer cut plan of what he wanted to achieve than any other president before him. The new president 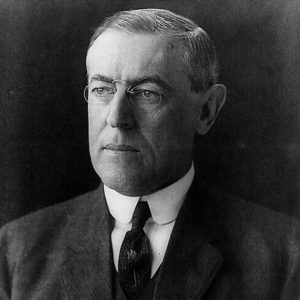 called for an all out assault on what Wilson called “the triple wall of privilege”: the tariff, the banks, and the trusts. In early 1913, Wilson attempted to lower the tariff. Wilson shattered the precedent set by Jefferson to send a messenger to address Congress when Wilson himself formally addressed Congress. This had a huge effect on Congress to pass the proposed Underwood Tariff Bill, which provided a substantial reduction of rates. The new Underwood Tariff substantially reduced import fees. It also was a landmark in tax legislation. Under authority granted by the Sixteenth Amendment, Congress enacted a graduated income tax. By 1917, revenue from income tax was greatly more than from the tariff and would continue on this trend for many years.

Next, Woodrow Wilson was determined to conquer the Bankers. The old banking system had been greatly outgrown by economic expansion. The country’s banking was still under the old Civil War National Banking Act which revealed many glaring defects. In the Panic of 1907, many flaws of the banking system, including the inelasticity of the currency, were overwhelmingly obvious. Wilson was determined to fix these problems. In June of 1913, Wilson made his second personal appearance to address Congress, this time for a plea to reform the banking system. And in 1913, again appealing to the public, Wilson signed the Federal Reserve Act, now considered the most important piece of economic legislature between the Civil War and the New Deal. The new Federal Reserve Board, appointed by the president, oversaw a nationwide system of twelve regional re-served districts, each with its own central bank. The final authority over these banks was granted to the Federal Reserve Board, which guaranteed a substantial measure of public control. The board was also empowered to issue paper money called “Federal Reserve Notes.” The amount of money in circulation could be swiftly increased as needed for the legitimate requirements of business.

In 1914, Woodrow Wilson tried to tame the trusts. Again making a personal appearance to address Congress with his propositions helped dramatize the situation and sway the support towards his ideas. Congress responded with the Federal Trade Commission Act of 1914. The new law empowered a presidentially appointed commission to toughen regulations on interstate commerce. This was supposed to crush monopolies by wiping out unfair trade policies. Next came the Clayton Anti-Trust Act of 1914, which was meant to further strangle the major monopolies. It lengthened the list of business practices deemed objectionable in the Sherman Act. Now, price discrimination and inter-locking directorates were gravely forbidden.

Wilson had caught the attention of the public by conquering the “triple wall of privilege.” With the full support of the public, Wilson pressed ahead with further reforms. The Federal Farm Loan Act of 1916 made credit available to farmers at low rates of inter-est. The Warehouse Act of 1916 authorized loans on the security of staple crops. Other laws also benefited rural America by providing for highway construction and the establishment of agricultural extension work in the state colleges. In 1915, Wilson passed the La Follette Seamen’s Act which required decent treatment and a living wage on American merchant ships. Wilson further helped the workers with the Workingmen’s Compensation Act of 1916, granting assistance to federal civil-service employees during periods of disability. In the same year the president approved an act restricting child labor on products flowing into interstate commerce, though the Supreme Court deemed the law unconstitutional. And in 1916, the Adamson Act of 1916 established an eight-hour work day for all employees on trains in interstate commerce, with extra pay for overtime. Wilson made giant steps in improving the quality of life for Americans.

Although Wilson had much success in America policies, Woodrow Wilson did lack the ability to achieve greatness when dealing with foreign policy. Wilson stopped dollar diplomacy immediately after entering office. Then in 1914, Wilson persuaded Congress to repeal the Panama Canal Tolls Act of 1912, which had exempted American shipping tolls which provoked major protests from Britain. Wilson also signed the Jones Act in 1916 granting the Philippines independence as soon they could operate a stable governmental system. Wilson also partially defused a dangerous situation between Japan and California. California passed a law prohibiting Japanese settlers from owning land. The main reason California did this was to discourage Japanese from settling in California. Secretary of State, William Jennings Bryan pleaded with California to ease its position. California gave in and the problem was partially defused for the time being.

But Wilson did have trouble in Haiti and Mexico. The climax of disorders was in 1914-1915 when the Haitian leader was overthrown. Wilson sent troops into Haiti to protect the American citizens living there. Wilson concluded a treaty with Haiti under the conditions that the United States provide supervision of finances and the police for the Haitian nation. In the same year Wilson sent marines to stop rioting in the Dominican Re-public. And in 1917, Wilson purchased from Denmark the Virgin Islands in the West In-dies. Wilson’s plan of anti-imperialism did not hold any more.

In April, 1914, a small group of American sailors was mistakenly arrested in the Atlantic Seaport of Tampico, Mexico. The Mexicans promptly released the captives and apologized, but they to give the twenty-one gun salute that the American admiral demanded. Wilson, determined to eliminate Huerta, asked Congress for authority to use forces against Mexico. Before Congress could act, Wilson ordered the navy, which was seeking to intercept a German ship bearing arms to Huerta, to seize the Mexican port of Vera Cruz, Huerta as well as Carranza condemned this American intervention. If it was for the intervention of the ABC Powers3/4Argentina, Brazil, and Chile, America would have most likely gone to war with Mexico over this ridiculous issue. But in January 1916, “Pancho” Villa killed eighteen American citizens in Santa Ysabel, Mexico. Then in March 1916, Villa and his gang shot up Columbus, New Mexico, killing seventeen Americans. Under Wilson’s orders, General John J. (“Black Jack”) Pershing commanded his army into Mexico killing most of Villa’s gang and innocent bystanders, but they never caught Villa himself. This was not one of America’s finest moments.

But Wilson’s greatest blunder in foreign policy was after the end of World War I. Wilson’s fourteen points was a brilliant set of ideas to help both the Allies and the Central Powers. Wilson was never out to hurt any country, unlike Britain and France who wanted revenge on Germany. Wilson knew that if they punished Germany for World War I, that it would only come back to haunt them. He was right. But many people did not listen to him. Wilson decided to go to Paris in person to fight for his fourteen points. This infuriated the Republicans. The Republicans were even more infuriated with what Wilson did next. Wilson needed people from Congress to attend the Paris Peace Conference with him. He neglected to bring one Republican from the Senate. Little did he know that the Republicans would not sign the treaty because of Wilson’s political blunder. In Paris, Wilson was extremely disappointed with Britain and France. They did not agree with his fourteen points and at the end Wilson had to sacrifice many of his ideas to get the League of Nations in the treaty. As you know, the United States did not enter the League because of Wilson’s stubborn attitude of all or nothing. Wilson’s political blunder in dealing with foreign relations hurt him as president.

Although Wilson was a master in forming American polices, his scheme on foreign policies was not as clear cut and precise. In America, Wilson passed many invaluable laws fighting the tariff and the trusts. He also set up a brilliant banking system which could fluctuate with the good times and bad times. But Wilson was stubborn, which was especially seen when his fourteen points failed. He would not settle for just some of his plan. It was either all or nothing. And as it turned out, it was nothing. Wilson was a genius at working with the Americans, but failed at being one of our greater presidents dealing with foreign policy.