Kate Chopin was an American author who lived during the nineteenth century, but because of The Awakening, a novel which was considered scandalous at the time, she has just recently been “…accepted into the canon of major American writers”(Trosky 105).

Through Kate Chopin’s main character of The Awakening, Edna Pontellier, she is able to portray her feelings and desires that were otherwise 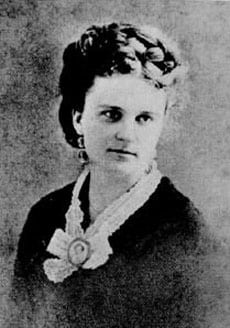 suppressed by the ideals of American society at that time. Kate Chopin was born on February 8, 1851 in St. Louis, Missouri. She was brought up in a family that was a member of the prominent French- Creole community. During her childhood she possessed a love for reading. Her favorite types of literature were fairy tales, poetry and novels. She secluded herself for almost two years, away from her family and school in her attic, spending the majority of her time reading (Trosky 102). After her schooling, Chopin spent her days as a belle in St. Louis’ high society. She was greatly admired for both her beauty and wit. She continued her readings, becoming more interested in contemporary works. In 1869, she traveled to New Orleans where she met Oscar Chopin, whom she married. Though married, Chopin remained fairly independent, practicing habits such as smoking and walking alone in the city, two things unheard of from women at that time.(Trosky 102) In 1883, Oscar Chopin died of swamp fever. By 1884, Kate moved with her six children back to St. Louis.

Around this time, Chopin began her writing career, writing in periodicals and publishing collections of short stories. She received good reviews and continued to write at an impressive rate. Her acclaim was short lived though, following the publication of The Awakening. “This work, which would eventually be recognized as her masterpiece and a seminal work in American feminist fiction, first proved her most notorious publication and her literary undoing.”(Trosky 103) At the time, Chopin’s novel was considered scandalous and immoral, for it dealt largely with a women’s sexuality. At the time The Awakening was written, a novel would be judged on its moral message as much as its artistic merits. After the negative response of critics, Chopin published a few more works, but nothing was well received. She received little recognition, which when given, described her as an author of southern local color stories (Trosky 103). Local color writing was a movement which tried to capture the feeling of a particular region through descriptions of local speech and manners (“The Age of Realism”). Eventually all of her publications went out of print. Around the same time Chopin’s health was declining, and on August 22, 1904, she died of a brain hemorrhage.(Trosky 103) Kate Chopin lived in and wrote during a period in American literature which was known as the Age of Realism. The Age of Realism occurred between the years of 1871 and 1913. “Realism was in part a revolt against romanticism and its idealized portrayal of life.” (“The Age of Realism”) Authors of realism wanted to show life as it really was.

It encouraged writers to write about the problems and conditions around them, often using the dialects and language of ordinary people.(“The Age of”) Chopin was often compared to other realist writers of her time, such as George Washington Cable, who wrote similar to Chopin. The works of both Cable and Chopin were seen “…almost entirely as an emancipation of Southern local color”(Springer 200). Cable, like Chopin was an author who wrote the Creoles. Both he and Chopin published a great deal of their work in magazines (“The Age of Realism”). The Age of Realism is evident in Chopin’s works, which usually deal with those Americans of French decent living in Louisiana or in St. Louis.(Springer 201) She wrote about the real world, that of which she knew from her experiences growing up. Chopin’s major themes revolved around: a woman’s role in society, marriage, and a woman’s sexual nature and growing independence.(Davis 52) These topics were almost unheard of, for they were considered very wrong, “…[violating] several nineteenth century principles of womanly literature decorum.”(Davis 60) As stated earlier, Chopin wanted to be independent, something unacceptable for women at that time. Her desire for independence was portrayed in The Awakening, by the novel’s main character Edna Pontellier. The Awakening takes place at Grand Isle, not far from New Orleans. Edna Pontellier is a woman who becomes very unhappy with her life. She finds herself in a marriage that is not out of love, but something expected of her. She has two children, whom she loves, but at the same time feels burdened by.

As time goes on she grows more and more unhappy. Soon Edna begins to fall in love with another man, Robert Lebrun. Robert, becoming frightened by his feelings for Edna, leaves to live in Mexico, trying to forget Edna. While Robert is gone, Edna becomes more and more independent. She refuses to do anything, even activities that she used to do without objection, such as sleeping in the same bed as her husband. She also neglects her children, and her duties as a wife and woman of the community. Robert eventually returns from Mexico, unable to stay away any longer, but his return is short lived. Robert leaves once again, realizing that what they are doing could never work because Edna is married with kids. Edna unable to bear the pain any longer, returns to Grand Isle, where she and Robert first fell in love with one another. Edna undresses herself and swims out as far as she can and drowns herself, leaving behind her husband and children. All of Chopin’s major themes are present in The Awakening. Edna’s marriage to Leonce is a major factor of the story, because her marriage keeps her from being able to following her true feelings for Robert, the man she was really in love with. Edna’s role in society is also questioned.

The women of her time and class were expected to be very domestic, taking care of the children and socializing with the other women of the community meeting weekly. Edna breaks the tradition, by going out on Tuesdays, the day when all the women come to visit her, to walk around the city alone. Edna also takes up art, doing sketches and drawings, not a very popular activity for women. The biggest shocker in the book, which may be why it received such bad criticism, is the fact that despite Edna’s marriage she fantasizes about being with another man, and then acts on it. Edna’s actions illustrate a woman’s sexual nature as well as her independence. Many of Edna’s actions reflect the feelings of Kate Chopin. When Chopin writes that Edna walks alone in the city, it can be said that Edna’s actions are influenced by Chopin, who is also walked alone in the city and acted very independently. Although Chopin’s real life did not go as far as Edna’s, it can almost be assumed that Kate Chopin lived the way she really wanted to through Edna. Kate Chopin was not a very successful writer during her lifetime, receiving no awards or special recognition. Kate Chopin wrote ahead of her time. Her contemporary writing style, although it can be appreciated now, ruined her writing career, depriving her of the recognition that she deserved during her lifetime.