Throughout history there have been several leaders who used their cunning and sly intelligence to trick the general population into following them and their beliefs. Eventually, these leaders had so much support; they could no longer be called leaders, but absolute and dictatorial rulers. However, during the period of Enlightenment and of the French Revolution, non-maleficent ideas, created by Locke, Montesquieu, Voltaire, and other Enlightenment Philosophers, were spread throughout the European population.

They stated the opposition to absolute monarchies as well as a new main focus on people’s innate rights and freedoms. Many leaders after this 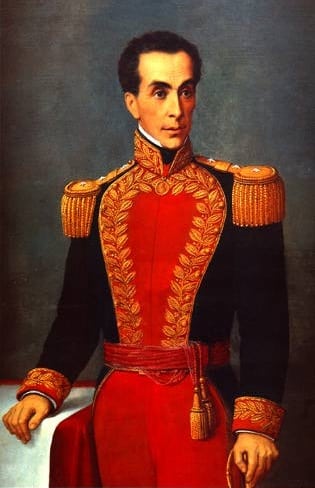 period of Enlightenment preached its ideas, while others simply used them to gain power. Simon Bolivar might have preached opinions that mainly reflected the ideas of the French Revolution. However, his actions contradicted these opinions, and revealed that his true intentions were selfish and illiberal. In several documents and speeches, Bolivar stated that he was very fond of freedom, liberty and equality. Clearly, it would seem that he desired democracy. This can be seen in his “Jamaican Letter”, where he states “More than anyone I desire to see America fashioned into the greatest nation in the world, greatest not so much by virtue of her area and wealth as by her freedom and glory.”

However, he adds to this “love of freedom” in saying that it is “inconceivable” to set up such a government, simply because there is not enough political knowledge for a system such as that to run. Further, Bolivar says that he agrees with the ideas of Montesquieu, who played a very important role during the Enlightenment period, and states that he is against absolutism. In looking at the beliefs Bolivar spoke of, one could almost come to the conclusion that he directly lectured the ideas fought for in the French Revolution; opposition to absolute monarchies, natural rights and freedoms, ideas of Montesquieu, and ruling for the people’s best interest. Interestingly, however, Bolivar never actually put any of his “glorious ideas” into action. Instead of setting up a democracy, ideas of which he praised, he arranged a system in which his total control was made known. He declared himself president until he died, created a weak legislative body with almost no power, and limited the right to vote to the Creoles, who were American-born Spaniards. Not only did this contradict his great “Love of freedom” that he originally spoke of, but also his hate of monarchy, a system of government not too far off from the “paternal constitution” he himself created. Furthermore, this government system doesn’t reflect ideals fought for in the French Revolution, which he once agreed with. In a document written by Bolivar, he states that he fears Black and Indian “insurrections.” Evidently, it can be seen that if Bolivar fears revolts of Black and Indian peoples, then these two groups are still being oppressed. Obviously, his original love of equality has faded if he is allowing the persecution of two very populous groups in Latin America, the Blacks and the Indians.

And last, a passage from the diary of Louis Peru de la Croix suggests that Simon Bolivar was “not always tolerant.” If Bolivar was intolerant, he wouldn’t have supported free speech, which again goes against his previous support of Enlightenment thinkers and of the French Revolution. In analyzing whether or not Bolivar was in support of ideals of the Enlightenment period and the French Revolution, one must analyze the terms “Beliefs” and “Actions.” It is true that Simon Bolivar talked of many beliefs which might have reflected these two periods of time. However, could it be possible that he was just looking to gain more power so that he could climb the political ladder and end up with total control? Once Bolivar did gain the power he needed, he seemed to reject all of his prior beliefs and take action resembling that of a dictator. It is true that actions speak louder than words, especially when the words gather power, then the actions abuse it.