Abraham (Bram) Stoker was born November 8, 1847 at 15 The Crescent, Clontarf, North of Dublin, the third of seven children. For the first 7 years of his life Stoker was bedridden with a myriad of childhood diseases which afforded him much time to reading. By the time he went to college, Stoker had somehow overcome his childhood maladies and while at Trinity College, Dublin, the honor student was involved in soccer and was a marathon running champion. He was also involved in various literary and dramatic activities, a precursor to his later interests in the theater and his involvement with the rising action Henry Irving, whose performance he had critiqued as a student at Trinity.

After graduation from college, and in his father’s footsteps, he became a civil servant, holding the position of junior clerk in the Dublin Castle. 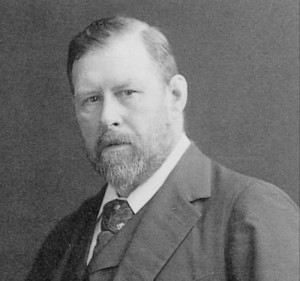 His literary career began as early as 1871 and in that year he took up a post as the unpaid drama critic for the “Evening Mail,” while at the same time writing short stories. His first literary “success” came a year later when, in 1872, The London Society published his short story “The Crystal Cup.” As early as 1875 Stoker’s unique brand of fiction had come to the forefront. In a four part serial called the “Chain of Destiny,” were themes that would become Stoker’s trademark: horror mixed with romance, nightmares and curses. Stoker encountered Henry Irving again, this time in the role of Hamlet, 10 years after Stoker’s Trinity days. Stoker, still very much the critic (and still holding his civil service position), gave Irving’s performance a favorable review. Impressed with Stoker’s review, Irving invited Stoker back stage and the resultant friendship lasted until Irving’s death in 1905. The Stoker/Irving partnership solidified around the year 1878. During this time Henry Irving had taken over his own theater company called the London Lyceum, but he didn’t like the management, and therefore approached Stoker to handle business, at which point Stoker gave up his government job and became the acting manager of the theater. A short time after Stoker began his new career, the publishing house of Sampson, Lowe contacted him expressing interest in a collection of Stoker’s stories.

“Under the Sunset” was published in 1891 and was well received by some of the critics, but others thought the book too terrifying for children. Stoker was already fascinated with the notion of the “boundaries of life and death” (Leatherdale, p.63) which made this book too terrifying for children at least in some of the reviewer’s minds. By the time Stoker had received favorable reviews for his romance novel “The Snake’s Pass” (1890), he was already making notes for a novel with a vampire theme, and by 1894 he was back to macabre themes. It seemed only a natural consequence that “Dracula” would follow and was published in June 1897.  Reviews on “Dracula” were mixed, and the book never yielded much money for Stoker. In a favorable review the “Daily Mail” compared it with “Frankenstein” and Poe’s “The Fall of the House of Usher.” “The Bookman” found it likeable in spots but commented that the “descriptions were hideous and repulsive.” (Leatherdale, p.68)  For the next few years after “Dracula’s” publication, events took a downward spiral for both Irving and Stoker.

There were troubles with Irving’s establishment and a fire destroyed part of the theater (including some important scenery) and Irving eventually sold it. Stoker did manage however to publish “The Jewel of the 7 Stars” in 1903, and it was a novel based on the information given to Stoker by an Egyptologist. In 1905 Henry Irving died, leaving the aging Stoker without a steady jot for the first time in his life. A year after Irving’s death Stoker wrote “Personal Reminiscences of Henry Irving.” Stoker managed to write other novels after this point until the time of his death in 1912 at the age of 64.