Thomas Cromwell was 1485 to humble beginnings, in Putney. His father was a brewer. He left at a young age and went to Europe and was a soldier in the French army. He then worked in Italy as an assistant to the Archbishop of York. He then returned to England and was in the House of Commons and joined the 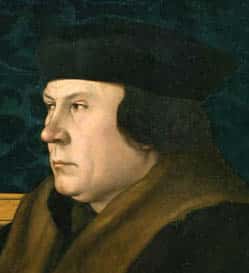 household of Cardinal Wolsey, and became his secretary in 1529 and was one of his most trusted advisers. However Cardinal Wolsey fell from power due to his failure to secure a divorce between Henry and Catherine of Aragon and died in 1530 on his way to trial. Cromwell knew the only way to gain power was to gain the King’s trust, and so set up a plan to allow the divorce. He suggested that Henry broke from the Church. The Reformation Parliament was formed to decide what to do and Cromwell used his influences to manipulate the commons until in 1532 they declared Henry as  “the only head, sovereign lord, protector and defender” of the Church. Henry gave Cromwell more roles in the government to show his gratitude. Cromwell was responsible for discrediting the papacy by spreading false information to the public.

In 1534 Cromwell was appointed as the King’s chief minister and began the dissolution of the monasteries. This made vast amounts of money, and this was to go directly to the King. However, Anne Boleyn disagreed with this and thought the money should be used for charitable purposes. It was the first time she disagreed with Cromwell and Cromwell began to plot her downfall and ultimately execution. He accused her of adultery and incest at the order of Henry, who wanted a male heir and had also fallen for Jane Seymour. Mark Smeaton, who was one of the four men she had supposedly slept with admitted it, though probably under torture and so cemented the King’s case against her. All of the other men claimed innocence when standing trial, but were still found guilty and sentenced to death. She was taken to the Tower of London on the 2nd of May 1536 and stood trial 13 days later. She was also found guilty and given the same sentence. Normally treason required a death by burning, but the King changed the sentence to beheading, and brought over a master swordsman from France to execute her.

Between 1536 and 1540 Cromwell presided over the dissolution of 800 monasteries, with their great wealth passing to the crown. In 1540 he persuaded Henry to marry Anne of Cleves after Jane Seymour’s death. The artist Hans Holbein was sent to Germany to create a portrait of her, and from this portrait the King approved of Anne. However, when she arrived at court, he was disappointed to find she was not as beautiful as Holbein had portrayed her. He wanted to avoid the marriage, but could not risk ruining the German alliance, and so reluctantly married her. Reportedly the marriage was never consummated, and the marriage was annulled only a few months later. Anne received a large settlement from the King, and owned many properties, including Hever Castle and Richmond Palace. Henry and Anne became good friends and he referred to her as his sister. However, the disastrous marriage didn’t help Cromwell, and he no longer had the King’s support. The Duke of Norfolk used this opportunity to topple Cromwell and he was condemned to death without trial. He was executed of the 28th July 1540 at Tower Hill.