Charles Dickens was born at Landport, in Portsea, on February 7, 1812. His father was a clerk in the Navy Pay-Office, and was temporarily on duty in the neighborhood when Charles was born. His name was John Dickens. He spent time in prison for debts. But, even when he was free he lacked the money to support his family. Then, when Charles was two they moved to London. Just before he started to toddle, he stepped into the glare of footlights. He never stepped out of it until he died. He was a good man, as men go in the bewildering world of ours, brave, transparent, tender-hearted, and honorable. Dickens was always a little too irritable because he was a little too happy. Like the over-wrought child in society, he was splendidly sociable, and in and yet sometimes quarrelsome. In all the practical relations of his life he was what the child is at a party, genuinely delighted, delightful, affectionate and happy, and in some strange way fundamentally sad and dangerously close to tears. At the age of 12 Charles worked in a London factory pasting labels on bottles of shoe polish. He held the job only for a few months, but the misery of the experience remain with him all his life. Dickens attended school off and on until he was 15, and then left for good. He enjoyed reading and was especially fond of adventure stories, fairy tales, and novels. He was influenced by such earlier English writers as William Shakespeare, Tobias Smollet, and Henry Fielding. However, most of the knowledge he later used as an author came from his environment around him.

Dickens became a newspaper writer and reporter in the late 1820’s. He specialized in covering debates in Parliament, and also wrote feature 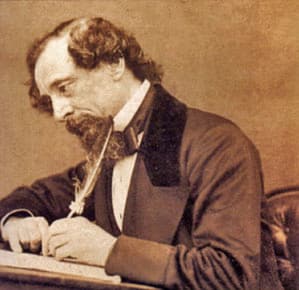 articles. His work as a reporter sharpened his naturally keen ear for conversation and helped develop his skill in portraying his characters speech realistically. It also increased his ability to observe and to write swiftly and clearly. Dickens’ first book, Sketches by Boz (1836) consisted of articles he wrote for the Monthly Magazine and the London Evening Chronicles. On April 2, 1836 he married Catherine Hogarth. This was just a few days before the announcement that on the 31st he would have his first work printed in The Posthumous Papers of the Pickwick Club. And this was the beginning of his career.  Then, at 24, Dickens became famous and was so until he died. He won his first literary fame with The Posthumous Papers of the Pickwick Club. Published in monthly parts in 1836 and 1837 the book describes the humorous adventure and misadventures of the English Countryside. After a slow start, The Pickwick Papers as the book was usually called gained a popularity seldom matched in the history of literature. Then in 1837, Catherine’s sister Mary, died. Because of her death Dickens’ suffered a lot of grief. This led some scholars to believe that Dickens loved Mary more than Catherine. Catherine was a good woman but she lacked intelligence. Dickens and Catherine had 10 children. Then later in 1858, the couple separated.

His later years was basically consisting of two main additions to his previous activates.  The first was a series of public readings and lectures which he began giving it systematically. And second, he was a successive editor. Dickens had been many things in his life; he was a reporter, an actor, a conjurer, a poet, a lecturer, and an editor and he enjoyed all of those things.  Dickens had a remarkable mental and physical energy. He recorded all his activities in thousands of letter, many of which made delightful readings. He spent much of his later life with crowded social friends from arts and literature. He also went to the theater as often as he could, because he loved drama. Dickens also produced and acted in small theaters to give public readings of his work.  Besides doing all this after his retirement he got involved in various charities. These charities included schools for poor children and a loan society to enable the poor to prove to Australia.  Then about 1865 his health started to decline and he died of a stroke on June 9, 1870.

Thank you, this was on great help!