You are here:
READ:
Hydraulic Jacks and Hoists

According to his theory, if these needs are not satisfied then one’s motivation will arise from the quest to satisfy them. Higher needs such as social needs and esteem are not felt until one’s bodily functioning needs are met.

Once physiological needs are met, one’s attention turns to safety and security in order to be free from the threat of physical and emotional harm. According to Maslow’s hierarchy, if a person feels that he or she is in harm’s way, higher needs will not be met.

Once a person has met the lower level physiological and safety needs, higher level needs start becoming important. Social needs are those related to interaction with other people and may include:

-Need to give and receive love/ affection.

Self actualization is the summit of Maslow’s hierarchy of needs. It is the quest of reaching one’s full potential as a person. unlike lower level needs, this need is never fully satisfied; as one grows psychologically there are always new opportunities to continue to grow. Self actualized people have frequent occurrences of peak experiences, which are energized moments of profound happiness and harmony. According to Maslow, only a small percentage of the population reaches the level of self actualization. 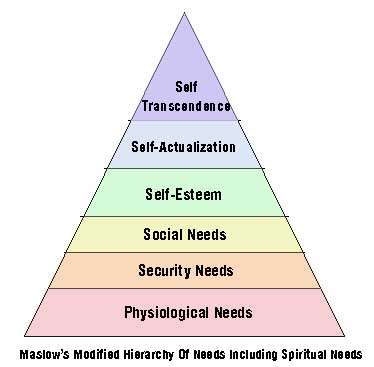