Stephan Grover Cleveland is the fifth of nine children born to Reverend Richard Falley Cleveland and Ann Neal Cleveland. He was born on March 18th of 1837 in Caldwell, New Jersey, although he was raised in Fayetteville, New York. The actual house in which he was born still stands today on 207 Bloomfield Avenue. He was named in honor of Stephan Grover, a minister at a local Presbyterian Church who Reverend Cleveland had recently taken over for. Life as the son of a minister was different than most boys. The Cleveland’s spent every evening at home in prayer. Cleveland felt that this moral upbringing was his most valuable tool in life. Grover Cleveland visited an uncle in Buffalo, New York, and obtained a job in a law firm.

While working there, he studied law and by May of 1859, the New York Supreme Court admitted him to the bar. Democratic politics had 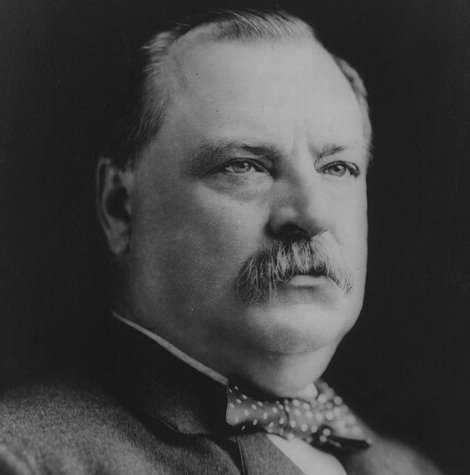 interested Cleveland since his arrival in Buffalo, so he became the county’s assistant district attorney. In 1865, Confederate General Robert E. Lee had surrendered his army to Union General Ulysses S. Grant at Appomattox Court House, Virginia. The Confederacy had collapsed and the United States was reunited and slavery was abolished. As the nation returned to peace, twenty-eight-year-old Cleveland won the demanding position of sheriff. When his term ended in 1873, he returned to his infamous law practice. On January 1,1882, Grover Cleveland took an oath to honor the city of Buffalo as their mayor. Cleveland was tough and honest. He was known as the “Veto Mayor,” because he continuously vetoed bills presented by corrupt politicians. In November of 1882, by a landslide margin of nearly 200,000 votes, Grover Cleveland became know as the “Veto Governor.” He understood the tremendous challenge of being the Governor of the State of New York, but his principles and values remained as strong as ever.

The door to his office was always open, and he kept no secrets. In two years’ time, Cleveland’s stubborn sense of fairness and honesty gave him the nickname “His Obstinacy.” He passed bills to enlarge the state’s water supply and established a 1.5 million-acre park at Niagara Falls. Due to his reputation, the Democratic Party convinced him to run for president. On the second ballot, Cleveland won the Democratic nomination. The Democrats chose Thomas Hendricks of Indiana, as his vice-president on the ballot. To oppose Cleveland for presidency, the Republicans picked former Maine Congressman, James G. Blaine. Blaine was highly respected as a brilliant politician and national leader. With both candidates the victims of scandals, in 1884 the United States had never witnessed such a nasty campaign. In the end, Cleveland won by a slim margin of less than 63,000 votes. In just three years, Americans had lifted Grover Cleveland from a city lawyer to the highest public office in our country. At the age of forty-seven, Grover Cleveland became the twenty-second President of the United States, on March 4, 1885.

A bachelor, Cleveland was not familiar with the comforts of the White House. During this first term, he ran into trouble. He filled every federal office with Democrats, whether or not they were deserving and merited the positions. In June of 1886, Cleveland married twenty-one-year-old Frances Folsom. He was the only president to be married in the White House and the first to have a child born in the White House, in 1893. Cleveland did not always make popular decisions, but based his treatment of injustices as the right thing to do. Over the years, unhappy trade workers banned together and formed the first trade unions. They were not pleased with their president. There was a huge gulf between the employer and employee. In December of 1888, he called on Congress to reduce high protective tariffs. The Democrats felt this would impact his re-election campaign, which he lost in 1888 to Benjamin Harrison. During his first term, Grover Cleveland was known as the “Veto President.” He issued more than 300 veto messages.

He vetoed many private pension bills to Civil War veterans, who submitted fraudulent claims, and vetoed a bill appropriating $10,000 to distribute grains to drought-stricken, Texas farmers, contending that aid would weaken the character of the nation. Another unpopular decision was ordering the investigation of the railroads. He forced them to return 81,000 acres of Government land, and enacted the Interstate Commerce Act, which was the first law passed regulating the railroads. During President Harrison’s term, many issues angered Cleveland. The McKinley Tariff was passed, which taxed import items at the highest rates in history. The Congress also granted higher pensions for Civil War veterans. By the end of Harrison’s term, Congress had spent so much money on wasteful projects, that the treasury was almost empty. Predicting a national disaster, Grover Cleveland agreed to run for a second term as president. He returned to the White House in 1893, as his wife had predicted. Four years of careless spending by the Republicans pushed the United States into an acute depression. He had to act drastically, and dealt directly with the Treasury crisis, instead of with business failures, farm foreclosures, and increasing unemployment.

On October 30, 1893, the Sherman Silver Purchase Act was repealed, and confidence was restored in the American dollar. In spite of Cleveland’s efforts, the national depression worsened, and the Democratic Party was divided. When railroad strikers violated an injunction in Chicago, the President sent Federal troops to break up the strike against the Pullman Company. His blunt treatment of the railroad company was very unpopular. His party deserted him and nominated William Jennings Bryan for president, in 1896. At fifty-nine-years-old, Cleveland felt disgraced as he finished his term in the White House. He retired peacefully in Princeton, New Jersey, but continued pressing for government reforms. At the age of seventy-one, Grover Cleveland died on June 24, 1908. Americans were deeply saddened and mourned the passing of this heavy, robust. man, who was so famous for his tremendous strength and energy. Grover Cleveland will always be remembered as courageous, hardworking, and honest, in spite of the outcome.