Maria Montessori was born in the village of Charaville, Italy on August 31, 1870.  She was born to a well respected family and was expected to grow up to fulfill the traditional role of the Italian woman.  When she was three years old, the family moved to Rome where she received her education.  Upon graduating from high school, Montessori pursued an advanced degree at the University of Rome and became the first woman physician to graduate in Italy.  Her interests drew her to work with children, mainly those who were disadvantaged and had special needs.

Montessori became an anthropologist.  Through her work at the Orthophrenic Clinic, her decisions about working with children were 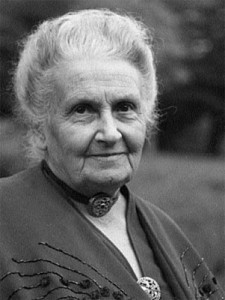 made up by observing them first.  She was not trained as an educator, so her decisions were based upon watching what children did and what they were attracted to.  In 1898, Dr. Montessori addressed the Congress for Teachers.  She spoke of an anthropological approach to children’s development.  This led to teacher training at The State Orthophrenic School.  Dr. Montessori lectured on the function of the school teacher, whose task it was not to judge the children.  She felt it was the teacher’s role to help guide and enlighten something that was asleep in the student.  Mental work would not exhaust the child; it would give the child nourishment.  Through her observations and trial and error, she developed what became known as the Montessori Method of education.  She experimented with materials that would awaken the child’s potential.  It was a radical departure In Montessori’s time.

A new housing project was being built in a part of Rome.  The tenants of the housing project where day laborers who left their children of five years of age home alone and unsupervised.  Dr. Montessori was given a room for the children in one of the buildings  and named the director of it.  Up to 60 children stayed there during the day.  On January 6, 1907, the first Casa de Bambini, which is a Children’s House, was opened.  Dr. Montessori did not place children in restricting environments, but instead designed them to reflect children.  The rooms were set up like a house, with the then-revolutionary idea of child-sized furniture.  Tables and chairs were child-sized and materials were placed on low shelves to be easily reached by the students.  In addition, many of the skills were designed to teach children how to become more independent and to do things for themselves.

Soon after, a Casa de Bambini was opened in Barcelona.  It became the first school where a religious component was added to Dr. Montessori’s approach.  She held the first international teacher training course in Rome. It was attended by many people from all over the world.  During this time around 1973, Dr. Montessori’s work with children moved to the United States.

In 1915, Dr. Montessori came to the USA.  She went to the Pan American Exposition in San Fransisco.  There, she won the only award of the exposition, which was a Montessori classroom of children working behind glass walls.  After that, Dr. Montessori was invited to give a training course in London.  This course was given every two years.  In the early 1930’s, all of Dr. Montessori’s schools were closed because she refused to use her methods of teaching to teach the English Ministers principle laws.  She then moved.

While Dr. Montessori was in India, World War II broke out and she was not allowed to leave the country.  People came from all parts of India to learn of her teachings and to be trained as teachers.  While she was there, she developed more materials for the three to six year old child, created new materials for the six to twelve year old, and formulated new ideas about children from birth to three years old.  Many of Dr. Montessori’s lecture in India were published as, “The Absorbent Mind”, one of the many books she wrote.

During her later years, her focus became centered on educating the children to promote the principle of peace.  Dr. Montessori died at the age of 82.  Her legacy has been the establishment of Montessori schools around the world, which further educates the cause of the child as a citizen of the world.