Leonard Bernstein was born in Lawrenceville, Massachusetts on August 25, 1918. He was the first born child of Samuel and Jennie Bernstein, who lived in Boston, but had gone to Lawrenceville to visit some relatives.

Bernstein’s parents had little knowledge of, or interest in classical music. The only records Leonard remembers hearing on his family phonograph when he was a child were the popular hit songs of the day, such as “Barney Google” and “Oh by Jingo.” For the most part, Leonard Bernstein was an unhappy child. He said, “I was a miserable, terrified little child” (Musicians p.64). His family moved from town to town, 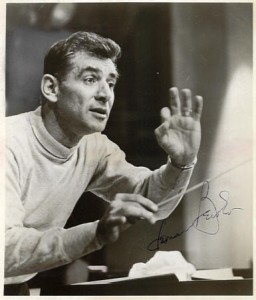 during Bernstein’s school days, not giving him a chance to make close friends or feel at home. Sadly, Bernstein’s peers would make fun of and tease Bernstein. He was a very sickly child as he suffered from chronic asthma, rose fever, and hay fever. This pathetic child grew to be a very shy person.

Leonard always had a heart for music, even as a young boy. As an eight year old, one morning, when he was sitting in the synagogue, the religious music of the choir and organ overwhelmed him by its beauty and caused him to burst into tears. When Leonard and his family would visit their friends, Leonard would sneak over to the piano and experiment. When he was eleven, his aunt sent her piano to his house for his family to keep for storage. “I made love to it right away” he recalled (Musicians p. 65). He could escape from all his frustrations and sadness by playing the piano. His parents didn’t like the fact that he was always at the piano, they wanted him to concentrate on his school work. They thought of piano playing as a waste of time because it stood in the way of Leonard’s learning his father’s business, which they planned for him to eventually take over.

At the age of ten, Leonard found a piano teacher who would give him lessons for a dollar a lesson. But that teacher soon moved away and Leonard found himself paying another piano teacher three dollars a lesson out of his allowance. After more than a year of piano lessons that just weren’t teaching him much, Leonard found a new, and this time excellent piano teacher named Helen Coates. She was sensitive to Leonard’s shyness and knew what it took to teach him. She had him study symphonies and operas from the printed page and encouraged him to compose. She also encouraged him to go to concerts. After watching Stravinsky’s The Rite of Spring and Prokofiev’s Classical Symphony, he became aware not only of symphonic music, but specifically of twentieth century music. Until then, he never realized that music had a future. He had always thought of it as something that had already been written. Bernstein’s desire for music became greater and greater. He began attending the public concerts of the Boston Symphony.
“‘He was frighteningly gifted,’ Miss Coates recalled in later years. ‘He could read, sing and memorize anything. He absorbed in one lesson an arrangement that took most of my pupils five or six lessons to learn.'”1

As an eleven year old, he entered The Boston Latin School and graduated with honors in 1935. He was an outstanding student- in the top ten percent of his class, but didn’t seem to exist without music. It was, by now, a part of him.
Soon, after he turned thirteen, he and his dad went on a cruise through the Panama Canal. He entertained everyone on the cruise with his piano playing. Everyone loved him so much that the ship’s director offered him a permanent job with the ships staff.

Music really changed Leonard’s shy personality for the better, along with his poor health. From Boston Latin School Bernstein went on to Harvard College. He wrote for and performed in college productions, played the piano for the glee club and provided the background music for silent motion pictures. In 1939 Bernstein graduated from Harvard with the degree of Bachelor of Arts and a cum laude in music. By this time Dimitri Mitropoulos, the director, had become interested in him. He encouraged Bernstein to join him at the Boston Symphony’s rehearsals. He also encouraged him to consider becoming a conductor. Bernstein felt he must get away from his father’s persistent nagging to join his business, so he left home and found a place for himself in music in New York City.

Bernstein attended the Curtis Institute for two years, where his main interest was in conducting. For the summers of 1940 and 1941 he studied at Tanglewood with Koussevitzky. It only took those two summers for Koussevitzky to become impressed enough to want to have Bernstein as his assistant. In 1942 he was invited by Rodzinski to act as assistant conductor of the New York PO. November 13, 1944 was the day that Bernsteins career skyrocketed. The Sunday afternoon concert of the New York Philharmonic, which was broadcast on a national hookup of the Columbia Broadcasting System, was to be conducted by Bruno Walter, guest conductor. The evening before that concert Walter became too ill to perform, and Bernstein was chosen for a last minute substitute. He had no opportunity to rehearse the orchestra and only a few hours to prepare himself for a long and complicated program that included the world premiere of Miklo`s Ro`zsa’s Variations on a Hungarian Peasant Song. Bernstein appeared wearing a gray business suit, which was the first time a conductor had worn everyday clothes at a Philharmonic concert.

Soon after, he appeared with the Pittsburg and Boston orchestras and became conductor of the New York City Orchestra (1945-1948). The first concert he conducted with his new orchestra was the Israel PO in 1947. “He served as its music advisor in 1948-1949, and was co-conductor with Koussevitzky for the orchestra’s American tour in 1951” (Grove p. 631).On September 9, 1951, he married Felicia Montealegre in Boston. 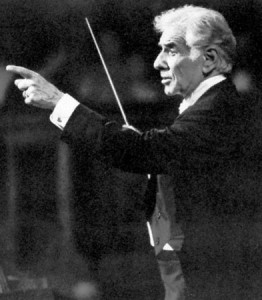 She was a young actress, born in Costa Rica, who had come to the United States trying to make appearances on the stage and on Television. They lived in a nine room duplex on Fifty-seventh Street, diagonally across to Carnegie Hall. There they raised their first two children. Their household included Helen Coates, who had been Bernstein’s piano teacher from long ago.

In 1957 Dimitri Mitropoulos, music director of the New York Philharmonic, appointed Bernstein co-director for the 1957-1958 season. When that season ended, Mitropoulos withdrew to leave Bernstein as full music director. He was both the youngest man and the only American-born musician to be in that position. He held it for eleven years, longer than any director in the history of the organization.

Leonard Bernstein became a teacher and a commentator on music with classes at the Berkshire Music Center, Brandeis University, Harvard University and Massachusetts Institute of Technology. In October 1976 , the Bernsteins announced that they had decided upon a legal separation. Although their marriage lasted twenty-five years, Bernstein said that his marriage was holding him back from being the best artist he could be. When Mrs. Bernstein became seriously ill, though, they were reconciled.

Bernstein has received such awards as the Albert Einstein Commemorative Award in the Arts from the Albert Einstein College of Medicine; the John H. Finley Medal for service to New York City; the Golden European trophy, an annual award given to an outstanding figure in popular music; the Datsun Award for “outstanding service to American music”; the Institute of International Education Award presented by President Nixon; and the George Foster Peabody Awards for his television programs. Bernstein provided the music for four famous Broadway musicals with a superior amoun of sophistication and technique. Often times, he would produce music with great humour and sentiment. Bernstein’s great talents led him to author a few books in the 1960’s. One of his most recent, famous collections of his music is used in the ever popular film West Side Story.

Leonard Bernstein was the “Renaissance man of twentieth century music.” Over the decades, Bernstein has been called one of the most charismatic and gifted personalities in the music of our times.