Born October 6, 1917, Fannie Lou Hamer was born and raised into the life of sharecropping (A plus E Network,

2012). As was common with share cropping families, Fannie Lou Hamer’s family struggled to live a decent life; they constantly strived to get free (Women in History, 2012). Fannie Lou Hamer’s mother and father were Jim and Lou Ella Townsend (Women in History, 2012). She was the youngest sister of twenty brothers and sisters (Mills, 2012). Fannie Lou Hamer’s family was forced to put her to work in the fields at the young age of six (Butler, 1997 – 2011). Even through these difficulties in her life Fannie Lou Hamer was privileged enough to be able to go to school. Fannie Lou was allowed to continue her schooling until she reached the eighth grade (Mills, 2012). When she was of age, in 1944, she married a man named Perry Hamer; he too was a sharecropper (A plus E Network, 2012). Although the couple did not bear any children they adopted two girls (Mills, 2012). 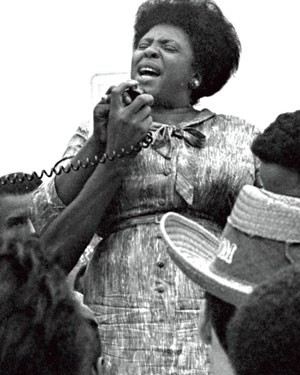 (Mills, 2012). She found a job as a field secretary to the Student Nonviolent Coordinating Committee [SNCC] (Mills, 2012).

The Mississippi’s democratic political party was completely composed of white people and did not allow blacks to join (A plus E Network, 2012). Fannie Lou Hamer decided to do something about that. With the help of her friends from the Student Nonviolent Coordinating Committee [SNCC] Fannie Lou Hamer founded the Mississippi Freedom Democratic Party (A plus E Network, 2012). By doing so, the Student Nonviolent Coordinating Committee [SNCC] was able to put the civil rights protest on a national level (A plus E Network, 2012). More and more people began to join the civil rights protest to get the attention of the nation, and not all of them were black (Mills, 2012). “In 1964, presidential elections were being held. In an effort to focus greater national attention on voting discrimination, civil rights groups created the Mississippi Freedom Democratic Party (MFDP). This new party sent a delegation, which included Fannie Lou Hamer, to Atlantic City, where the Democratic Party was holding its presidential convention. Its purpose was to challenge the all-white Mississippi delegation on the grounds that it didn’t fairly represent all the people of Mississippi, since most black people hadn’t been allowed to vote. (McGee, 1999)”