Norman Rockwell was a very realistic and successful 20th century artist. His paintings were recognized and loved by almost everyone in America. They captured reality and were almost photographic in their representation. Rockwell also succeeds in having an aesthetic feel in his paintings. Aesthetics is an appreciation of beauty. In all of his paintings, they can be appreciated for the quality, beauty, and time put into them. A particular one of his pieces that he painted is entitled, Boyhood Dreams. It entails a certain meaning that can relate to my cultural 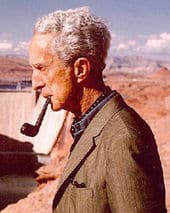 Norman Rockwell was considered a reserved man, not given to grand gestures. He impressed himself on America’s collective imagination by his stubborn attachment to the old values. His ability to relate these values to the events and circumstances of a rapidly changing world made him a special person in ways both hero and friend to millions of his fellow citizens. His ability to get the point across in one picture, and his style for painstaking detail made him a favorite of the advertising industry. Rockwell helped preserve American myths, but, more than that, he recreated them and made them appealing for new generations. His function was to reassure people, to remind them of old values in times of rapid change.
One of Rockwell’s pieces that stuck out amongst the rest is one of a young boy sitting on a fence in a field watching a locomotive off in the distance. This painting is entitled, Boyhood Dreams, which was painted in 1974 on an 18 x 18 size canvas. This was one of three painting in a series that Rockwell painted called, Childhood Treasures. The main colors used on this piece are green, gray, tan, blue, and darker shades of these colors. This genre painting demonstrates a various number of techniques in artistry. For one Rockwell uses foreshortening. Foreshortening represents space by adjusting objects that are closer, making them noticeably bigger.

This is represented by the little boy and his dog sitting on the fence, which is larger than the train, mountains, and town in the background. This ultimately gives you a sense of distance between the boy and the objects in the background. Also, kinetic lines are used in the painting. A kinetic line is a line that incorporates actual movement. This is used where the smoke is coming out of the locomotive while it is moving forward. The smoke is moving back but also in an upward motion, which implies the train is moving forward. Another type of style is used in this painting. For example in this painting, the train, mountains, and power lines become blurrier and do not appear as bright as the objects in the front of the painting. This style used is referred to as atmospheric perspective. This is a way of using color to achieve the illusion of depth in a two dimensional artwork. As objects recede into the background they become blurrier, have lower color intensity, and have less contrast. Rockwell used these techniques to achieve the great detail and beauty in this painting. 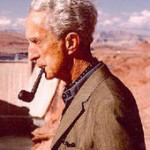 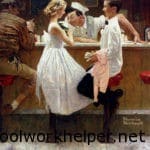 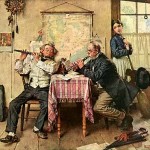 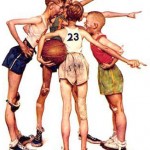 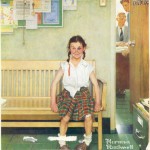 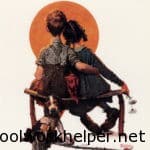 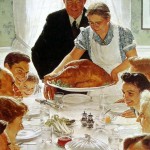 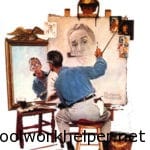