Kathe Kollwitz was born in 1867 and died in 1945. She was a powerful, intense artist who produced works of great tenderness. Her two artworks ‘Woman with dead child’ and ‘Unemployment’ revel the suffering of humanity and social working class.

Kathe Kollwitz was greatly influenced by the hardships of humanity, her main subjects being body language, distortion, death and human 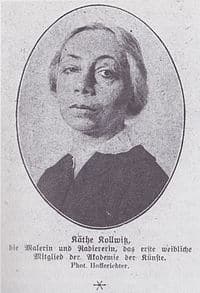 vulnerability, as well as fleeting joys. She also focused on social problems with city life, such as prostitution and unemployment and the suffering of the German working class. She was fascinated by working class women and depicted them as persons of character, strength and responsibility. The suffering of humanity is well depicted in Kollwitz’ artwork, ‘Woman with dead child’ because the mother’s face is hidden, showing deep sorrow. The two are entangled in each other, almost as if they are one being.

Kollwitz’ work has a combined depth of emotion revealing intimacy and drama of individual human relationships with direct social comment. It is neither sentimental nor abstract. She depicts women as more than just objects of beauty. Kollwitz uses body language and expressive line work. A good example of this is in ‘Unemployment’. She uses facial expressions and emotional links between the figures. There is heavy line work and shadow used on the father that sets him apart from his family, as if he can’t face the responsibilities. Kollwitz has the action close to the viewer to create intimacy and reveals sensitive handling of light and form through skillful handling of printmaking medium. She varies thickness of lines for expressive purposes and has a subtle handling of the soft ground etching technique. Kollwitz uses pure printmaking such as lithography, woodcuts and etching, and has a mixed technique because of her dramatic interplay of light to focus on facial features and emotions.

The suffering of humanity is revealed in Kollwitz’ artwork, ‘Woman with dead child’. It is a highly emotional piece. The way the mother clutches her child, in a tight embrace, not wanting to release the tie between them. It is very touching and a sympathetic piece. The artwork was completed in 1903 on soft etching with engraving overprinted with a gold tone plate. Tone and expressive line work add to the emotional impact, as well as its visual impact. There are a lot of grey areas highlighting the darkness and emptiness felt by the mother. The images are close up and large to accentuate the suffering and sadness.

Kollwitz’ artwork ‘Unemployment’ was completed in 1909 on etching, soft ground using dry point, aquatint and burnishing. The artwork is symbolic of the social problems of the period. It shows the despair of the poor and the resultant family pressures unemployment causes. Using light very dramatically Kollwitz focuses on facial expressions and emotional links between the figures. Heavy line work and shadow are used well to set the father apart from his family. Tone and line are dramatically used to highlight despair and family pressures. Facial expressions are clear and it is evident that the family is distraught. 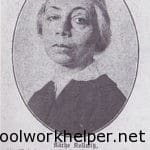 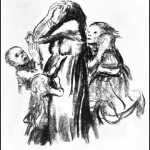 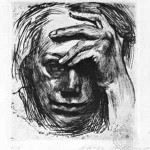 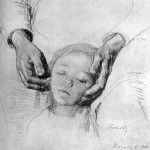 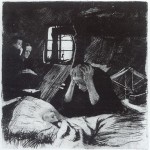 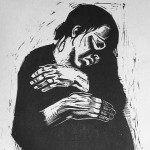 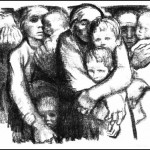 In conclusion Kathe Kollwitz is an important artist who’s work is was greatly influenced by her surroundings. She was very in touch with her emotions and her work reflects that. The hardships of humanity were her main focus. The suffering and social problems experienced by the German working class is revealed in her artworks.