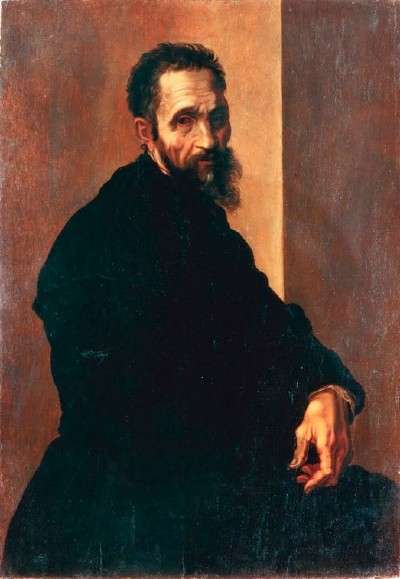 famous artists of the Italian Renaissance. According to Charles de Tolnay Michelangelo’s three greatest works of his later life, were the Tomb of Pope Julius II, the Sistine Chapel ceiling, and the Medici Chapel(37). Michelangelo’s specialty was painting the human body unclothed.  In order to learn to paint the human body so well he would dissect human corpses. His artistic talents were noticed at a very early age.  Michelangelo went to study with Domenico Ghirlandago, who taught him about painting.  He then went on to work with Donatello to learn about sculpture.  Between the years of 1490-1492 Michelangelo lived in the house of Lorenzo de’ Medici and was influenced by Neoplatonic thought. Some of Michelangelo’s early painting showed the influence of Giotto and Masaccio.  Also many of his early sculptures show the influence of Donatello (Columbia University Press). Michelangelo’s artistic career can be divided into two periods.  In the early period he focused on realism. During this early period Michelangelo’s works included the “Pieta” and the “David.”

At the age of 24 he completed a statue called the “Pieta,” showing the dead Jesus Christ in his mother’s arms. In 1501 Michelangelo returned to Florence, Italy to sculpt the famous nude sculpture called the “David.” The “David” measures 18 feet tall, and is so massive that it took 40 men to move it from Michelangelo’s workshop (World Book 5016) the second period of Michelangelo’s career was based upon his imagination. In 1505 Michelangelo was summoned by Pope Julius II to fabricate his tomb.  Michelangelo was so excited about making the tomb for the Pope that he spent many months looking for the perfect piece of marble to make the tomb. A short time after starting the tomb Pope Julius II selected Michelangelo to decorate the Sistine Chapel ceiling. The Sistine Chapel is in the palace of The Vatican in Rome.  The Sistine Chapel was built by Pope Sixtus IV in 1473. The Sistine Chapel ceiling took over four years to complete, 1508-1512. Michelangelo was able to accomplish this enormous job in such a short amount of time because of his desire to finish the tomb (Janson 359). The walls of the Sistine Chapel were painted twenty five years prior to the painting of the ceiling.  One of the walls in the chapel told the story of Moses, and the other wall told the story of Jesus Christ. Michelangelo used the subjects of the paintings on the walls to determine the subject of his frescos,”…there remained only one subject he could use to complete the two preceding ones, that is the story of humanity…”(Tolnay 41).

The ceiling is made up of scenes from the bible.  Michelangelo took the text of the bible and painted it on the ceiling the way he interpreted it. According to Robert S. Liebert MD,  “…the ceiling is an inseparable amalgam of the biblical text of Genesis, the sin and fall of man, the foretelling of redemption and Michelangelo’s own imagination”(145). Pope Julius II gave Michelangelo the freedom to do what he wanted on the ceiling of the Sistine Chapel (Liebert 140).  The ceiling is made up of 343 figures; two hundred of these figures are between 10-18 feet tall.  The subject of the ceiling deals with “…the Creation of the World, Mans Fall, and his ultimate reconciliation with the Lord”(Janson 359). In the center of the chapel is five pair of beams that divide the mural. There are nine scenes from Genesis, Creation of the World, to the Drunkenness of Noah.  Michelangelo’s relationship with Pope Julius II influenced the paintings of the Sistine Chapel ceiling.  Pope Julius II was criticized for choosing Michelangelo to paint the ceiling without any experience in fresco painting. Michelangelo needed to be persuaded by the Pope to paint the ceiling because he really did not want anything to do with the ceiling. Forty two letters were found which were written by Michelangelo during the four years in which he painted the Sistine Chapel ceiling.  In his letters he does not mention anything about the 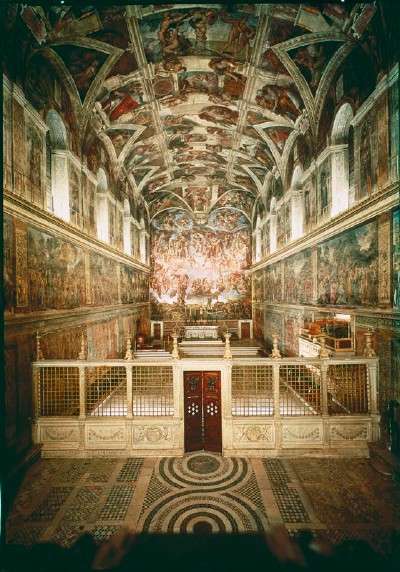 artistic details, but rather writes about the monetary aspects. Pope Julius II withheld money from Michelangelo.  Michelangelo justified it by saying in a letter to his father that his work did not deserve payment. In his letters he mentions that he has no friends and does not wish to have any.