Mozart is perhaps the greatest musical genius who ever lived. Mozart’s full name is Wolfgang Amadeus Mozart. Most people called him Mozart or Wolfgang. Mozart was born in Salzburg, Austria, January 27, 1756.

Mozart is the greatest musical child prodigy who ever lived. He began composing minuets at the age of 5 and symphonies at age 9. 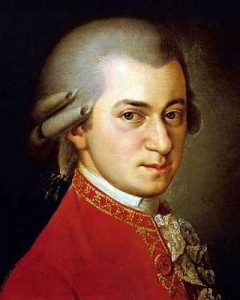 His father took him on a series of concert tours together with his sister, Maria Anna; born four and one-half years before Mozart. She too, was a child prodigy. Both played the keyboard, but Mozart became a violin virtuoso, as well.

In 1762 he and his sister, “Nannerl,” as she was nicknamed, performed before the Elector of Bavaria in Munich, and at the Imperial Court in Vienna. In 1763 the Morzart’s visited Mannheim. This is where Mozart, learned all about the orchestra and symphonies composed there. In London Mozart met the son of J. S. Bach. He played before distinguished audiences, and composed a sacred chorus. In 1770, he began to master the two types of Italian opera: opera buffa (comic opera) and opera seria (serious opera). In 1777, Mozart’s family visited Paris. His mother fell ill and died during their visit. In 1782, Mozart married Constanze Weber against his father’s wishes. In 1783, Mozart and Constanze visited Salzburg, where he helped Michael Haydn out of a difficult spot, by writting some violin duets. He completed a set of string quartets,

and in so doing, deeply impressed Josef Haydn who was the greatest master of music for string quartets. In 1786, Mozart’s London friends took part in the first performance of The Marriage of Figaro. This was a triumph for Mozart in Prague, and he wrote his “Prague” symphony as a tribute to its generous people.

In Paris, Mozart published his first works: four sonatas for clavier: with accompanying violin in 1764. In 1768 he composed his first opera, LA FINTA SEMPLICE, for Vienna; but intrigues prevented its performance, and it was first presented a year later at Salzburg.

Mozart was a successful composer and violinist. He used the form of concerto (like the symphony, in several section) to display the qualities of wind instruments, like the horn. His crowning achievements in concerto form, however, are for piano and orchestra – in all 25 works. Mozart’s performances of his own piano concertos had much to do with the development of the instrument. Mozart’s greatest success was THE MARRIAGE OF FIGARO, written in 1786, composed for the Vienna Opera. One of Mozart’s greatest and most well known pieces of music is THE MAGIC FLUTE; which was produced by a suburban theatre in Vienna. His greatest operatic success after Figaro was DON GIOVANNI written in 1787, composed for Prague where Mozart’s art was especially appreciated.

Mozart’s fame began to wane after Figaro. The nobility and court grew increasingly nervous about his revolutionary ideas, and his new musical style was not understood by many. He sank into debt and was assisted by a brother Freemason, Michael Puchberg. Mozart had joined the Masons in 1784 and remained an ardent member until his death.

In July of 1791, Mozart was working in his summer-house when a man called to see him. He would not say who he was, only that he came with a message. A nobleman had told him to ask Mozart to compose a Requiem Mass – a Mass for the Dead. But the nobleman wished to pass the music off as his own. Mozart agreed, not knowing the strangers true intention.

In November of 1791, Mozart was already ill and having imagined that the work was for himself, did not finish. He died on December 5, 1791, at the age of thirty-five. His death was accompanied by rumors of poisoning, but is now thought to have been the result of kidney failure. He was given a cheap funeral at Saint Stephen’s Cathedral and buried, with only the gravedigger as a witness, in an unmarked grave at the cemetery of Saint Marx, a Viennese suburb.