Queen Elizabeth was born on September 7th 1533 at Greenwich Palace. She was the daughter of Anne Boleyn who was the second wife of King 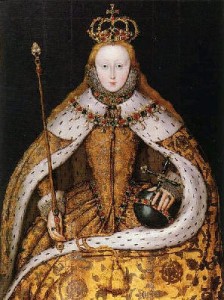 Henry VIII. The king hoped for a son after having a daughter. Queen Elizabeth’s mom was arrested, charged with a many crimes, and executed on 19 May 1536. Just 12 days later, Henry married Jane and his long awaited son, Prince Edward was born on October 1537. As a child, Elizabeth was given a very good education. When Elizabeth turned 15, her father passed away and Edward became king. If Edward were to pass away, then there step sister Mary would be queen and if she were to pass, then Elizabeth would be queen. Edward died in the summer of 1553 from being ill and now Mary became the queen. Elizabeth was accused of helping Thomas Wyatt and his men to seize the throne and was sent to the Tower of London as a prisoner. It was only at the behest of the Queen’s husband, Philip of Spain, which she was allowed to return to her childhood home. The queen was very ill and passed away on 17th November 1558, leading Elizabeth to the throne. Elizabeth was crowned Queen on Sunday 15th January 1559.

A few months later, Elizabeth became Supreme Governor of the Church of England. Since Elizabeth was queen, she got many proposals for marriage but didn’t accept any of them. Elizabeth came close to marriage with Robert Dudley, but did because it would be a disaster since he was the son of the traitor Northumberland.

Queen Elizabeth’s reign had a huge effect on theatre plays. She expanded the literacy and by the end of her reign, the literacy level in England was 33%. She allowed the big play houses to be built. The Elizabethan Theatre was built and was a huge success. Women were not allowed on stage in the Elizabethan theatre so men had to dress up like women.