“Dr. Benjamin Spock, hailed as the grandfather of pediatrics, is known as the leading authority on child rearing.” (Gale 1997) Dr. Benjamin Spock was born on May 2 1903 in New Haven Connecticut, The oldest of six children of a lawyer. Spock attended Yale university, where he became a member of the Yale rowing crew that won the gold metal at the 1924 Olympic games in Paris.

Spock planned to pursue a career in architecture, but changed his mind after spending a summer as a camp counselor. From that point on he 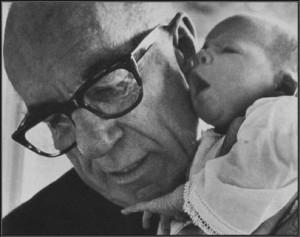 decided to become a doctor so that he could devote his life to helping children. From there on , Dr. Spock has been know as the authority on how to raise a child. Spock has written over 12 books on the subjects pertaining to child development and care. His first book Baby and Child Care published in 1945, has since sold more than 40 million copies., making it second only to the bible sales worldwide. The book has also been translated into 39 different languages. Not only is Spock known for being a great pediatrician and author, but he is known as a political activist as well. Spock was a high-profile political activist in the 1960’s. Spock came under fire from critics like Vice president Spiro Agnew in the 1960’s who branded him “The father of permissiveness” responsible for a generation of hippies. Spock joined those youths in protests against nuclear technology and the Vietnam War and in 1967 led a march on the Pentagon. He was arrested numerous times for civil disobedience, and even ran for U.S. president as a candidate for the people’s party in 1972.

Dr. Spock’s last contribution to this society came out in 1994 in the form of his last book. A Better World For Our Children, which contained recommendations for making America a better and healthier place. This book was published when he was 91 years of age. Spock was quoted as saying “I’ve slowed down a lot .. It took me almost five years to write this book” to the Detroit Free Press. “But I’m still very concerned with the health of children and the need for more good day care and better schools.” Dr. Spock died in San Diego with his family March 15, 1998, cause unknown.