Battle of Antietam & The Emancipation Proclamation

President Lincoln, shortly after the Battle of Antietam in September 17, 1862 in Maryland—where about 23,000 soldiers were killed or wounded and General Lee was rebound to Virginia providing a technical victory to Union’s army under Gen. McClellan—released the preliminary Emancipation Proclamation:, the decree 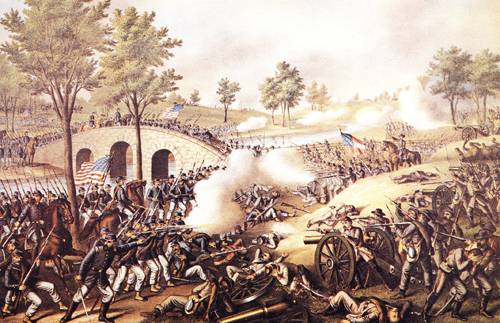 warned that the seceded states which returned to Union control by January 1, 1863 “their slaves shall be then, thenceforward, and forever free” (p.410). To explain the conductive role of Battle of Antietam we must first understand political and military issues of the time. The Border States and the one under the Union Army control were not mentioned in the decree, leaving untouched the slavery issue there. He compared the benefits and risks of the emancipation, even it would cause chaos to urge and support slaves escape from their masters making very difficult for Britain to Intervene (anti-slavery was there a strong thought). Military policy of Lincoln expressed in his brief formulation had amended the significance of the conflict—this was the judgment of many radicals and abolitionists that frighten the fact the only the slaves in the seceded states were freed. The Northerners came to understanding that the war was more than the restoration of the Union, as claimed previously by so known moderate Lincoln and the reunion could be achieved after the destruction of the slavery-based economy of the Southern States.

The Civil War’s traits made many historians consider it as the first modern war; definition related to the technologies used, the communication between armies and civil population improved through telegraph, railroads made possible transport of people and supplies, navy could improve strategies using ironclad ships, massacre caused by sophisticated weapons (artillery, rifled muskets); however, the most pronounced modern trait was the accentuation on destroying the enemy’s army and the disposition to cause hardship in the civilian population and together with it, slavery was an important element that framed this war.

While politicians were discussing the slavery issue and their attitude towards it, many slaves escaped from their masters and joined the Union Army. The situation was as concerning as a Virginian slaveholder requested to the Union to enforce the terms of Fugitive Slave Act of 1850. The Union army declared those slaves as seized property of the war. This policy was demonstrated and used as a smart war tactic by Lincoln’s administration to cause carnage in the South. The escaped or self-emancipated slaves coming continuously in the lines of Union’s Army made the administration and the Congress starting the process of exposure of slavery with the First Confiscation Act (August, 1861) considering free every slave who was used in the Confederate war effort and the Second Confiscation Act (July, 1862) authorized the Army to confiscate and render “forever free” (p. 408) the slaves of everyone assisting the Confederacy.

In July 1862, the president was authorized by the Congress to allow African Americans fight in the Union and revealed the important contribution of abolition of slavery to a victorious war. These events frighten more the Southerners who were worried not only about the loss of the slaves, but also about a possible slave’s extensive rebellion, while Lincoln understood the importance of emancipation as indispensable for the victory of the Union by two means: hitting at the heart of the insurrection and forestall British interference. Lincoln made present his intention to his cabinet on July 1862, but to ward off his act appearing as a desperate one, he was looking for a victory of the Union Army to release his decree and the Battle of Antietam in Maryland gave him the needed victory.   War time policies related to slavery issues, were important because they contributed to the African American efforts leading to the emancipation process.